Do you know what sucks?

When you unconsciously receive banknotes that are torn from a shop. It feels even much suckier when it’s a big note. And then you start getting this unnecessary stress from strategising ways to get rid of this damaged money ASAP.

“Just ‘sellotape’ the banknote lah. Can still use what…”

Actually… by rights, you CANNOT use the money anymore. These damaged banknotes aren’t supposed to remain in circulation because they’re no longer considered legal tender. If you’re not familiar with the term, it’s just another fancy way to say money (banknotes and coins) that are declared by law to be valid payment for debts and financial obligations.

Having said that, this Act has now been repealed and replaced by a new Act, the Central Bank Act 2009. Here’s an excerpt under Section 100:

Notwithstanding the repeal of the Central Bank of Malaysia Act 1958

In short, if your money is in good condition (not defaced or haven’t been tampered with), they’re fit for circulation - you can use them to make payment. If they’re not fit, you're advised to not use them. Also, businesses usually avoid accepting damaged money as payment.

Okay, but how to know if the money is “fit” for circulation?

In case you didn’t know, BNM is responsible for maintaining the quality and integrity of the Malaysian currency in public circulation. So they have to ensure that monies circulating in the market are to be maintained at the desired level to avoid any counterfeit or scam issue.

According to BNM, a Malaysian banknote/coin is considered FIT FOR CIRCULATION if it meets ALL of the following criteria:


Additionally, the national bank has also prepared examples of banknotes and coins that DO NOT meet the prescribed quality standards and are no longer suitable for distribution like below:

For more examples of unfit banknotes and coins, you can check out BNM’s Guidelines on Quality Standards for Malaysian Currency.

But, did you know that your damaged Malaysian banknotes/coins still have value?

… so don’t throw them away just yet. You could still exchange some of the unit currency with new or fit banknotes/coins. Just head over to any commercial banks (with a certain fee) or FOR FREE at any BNM branches to get them replaced.﻿

The exchange value will be determined using BNM’s guidelines of the assessment criteria: Meanwhile, for the mutilated coins, face value shall be given if the following conditions are fulfilled:

NOTE: The BNM’s head office and branch offices exchange counters might be closed during this pandemic, do give them a call first just to be sure.

“Okay, what if I discover fake (counterfeit) banknotes. Can I get a replacement for them?” 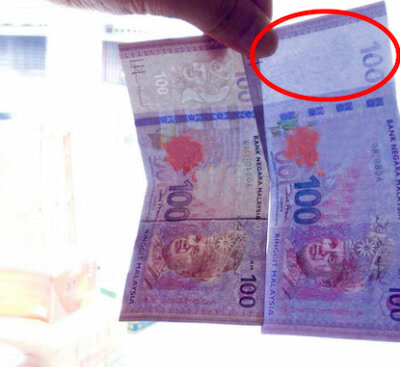 Unfortunately, NO. According to BNM, counterfeit banknotes have no value and therefore cannot be exchanged for a replacement. However, it’s still possible with a longer process (we’re talking about getting a lawyer and all that jazz).

So, if you ever receive fake money (which is highly unlikely), you should take note of who gave it to you, try not to touch it too much, put it in an envelope, and make a police report ASAP. And one more thing, DO NOT TRY to pass it on to others so that you can get rid of the fake money because distributing them is a serious offence. Yes, even if you are not involved in printing them.

You can read more about how to deal with fake money in this article: A Lady Allegedly Withdrew Fake RM50 Notes From the ATM. What Should You Do If the Same Happens to You?

We hope this article has been helpful. Don’t forget to share with your family and friends so that they know not all damaged banknotes/coins have no value.

It’s important to be vigilant and check your banknotes and coins from time to time, especially in the current world where there’s a wide range of credit cards and e-wallets to suit our requirements and lifestyles. If you think about it, we don’t really see the actual Ringgit to make a transaction anymore. But at least, if you ever encounter damaged banknotes/coins, you know what to do.