UPDATED: Which App Is Leading the Great Malaysian e-Wallet Showdown?

You’ve probably seen them everywhere by now — in almost every Malaysian mall and all over the internet, which means there’s no denying this: e-wallets are here to stay.

In fact, more players — like Maybank and its MAE app — are entering the market than ever before, perhaps even faster than lemang and rendang disappearing on Hari Raya! However, just because they’re everywhere, you don’t have to actually treat them like lemang and snatch them all up at one go.

You should instead pick the best of the best, or the crème de la crème if you prefer. After all, if you use only one wallet in real life, there isn’t really a need to have so many of them online either.

“But which is the best e-wallet in Malaysia?” you ask.

Don’t kan cheong! To help you answer this question, we’ve compared five e-wallets that are currently available in Malaysian in the table below. Can you guess which one is leading the battle?

Who are the CHALLENGERS?

Each of the e-wallets that are highlighted below was chosen for two main reasons: their usability and popularity.

The former indicates that these apps are usable daily and in a variety of places, just like an actual physical wallet. The latter is based on the popularity of the app itself or that of its creator. With these elements in mind, ladies and gentlemen, let’s meet our challengers: As its name suggests, GrabPay is an e-wallet offered by Grab, and it’s certainly hard to miss with its distinct green and white logo and the desire to be the ultimate ‘Everyday Everything’ app!

GrabPay is best known for being associated with Grab’s e-hailing service. By topping up your GrabPay e-wallet and using that money to pay for your Grab rides, for food, for deliveries and other commodities, you will gain points that can be exchanged for discounts, free rides and other GrabRewards.

You can also use GrabPay to complete transactions at restaurants and other physical stores; all of which will earn you points and GrabRewards as well. 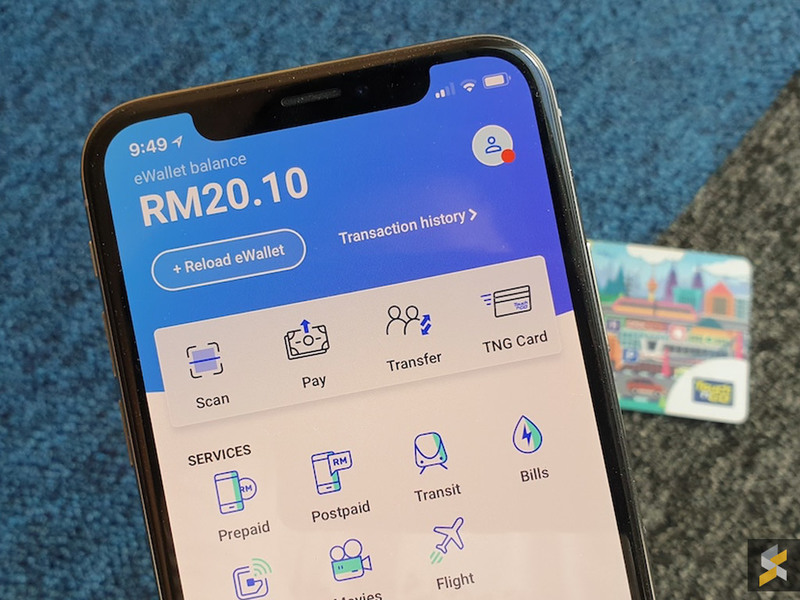 If there’s one thing that Malaysians can agree on (aside from our love for food!), it would be that Touch ‘n Go (TNG) has made commuting in Malaysia so much more convenient.

The introduction of the TNG eWallet certainly took the level of convenience that this digital payment platform offers to a whole new level. You can now use the money that you have stored in your TNG eWallet to pay for goods and services from various merchants with a few taps and enjoy some special treats (including investing your money to make it grow!) along the way too.

The best part? You can link your TNG eWallet with your TNG Card through TNG’s PayDirect system — which would then allow you to pay for tolls and parking directly through the app. Say goodbye to fumbling for your wallet at autopay machines and toll gates! Do keep in mind, however, that this feature is still being worked on and enhanced as you read this — but this list will tell you which locations allow the usage of PayDirect. Not too convinced about the security of e-wallets? Boost might just be the right app for you and anyone else who is sceptical in a similar way.

Aside from promising to “Settle la bro!” your mobile prepaid top-up transactions in just five seconds, the Boost e-wallet also has a promotion currently that offers cashback for postpaid bill payments. If you’re an Xpax or Celcom user, here’s even better news: the Boost app allows Xpax users to keep track of their credit usage and internet plan subscriptions, while Celcom Postpaid users receive cashback treats whenever they pay their bills with the app — even without the promotion mentioned above!

It’s also one of the most widely used e-wallets in Malaysia, so don’t be surprised when you are given the option to pay with Boost for your vegetables during your next pasar malam visit!

How do you know when a chatting app is ready to help you take your friendships to a whole new level? When it lets you send money to your friends with just a few easy taps, of course!

Aside from allowing you to pay for transactions and treating you to fantastic deals, WeChat Pay gives users the ability to transfer money to their friends in the form of a Money Packet — as long as the recipients are WeChat Pay users too.

Why do they have to be WeChat Pay users? Well, to enhance the convenience of using WeChat Pay, this e-wallet is actually integrated into the WeChat app itself and does not require a separate program, which also means that you get to save more space on your mobile device

Now that we’ve met our challengers, let the showdown begin!

And the WINNER is… (drum roll, please)

This is largely due to the e-wallet’s huge size, as well as its versatility in online functions like investments and toll payments — which are very important as we negotiate our lives in an increasingly digital world that was recently scarred by the COVID19 pandemic. We believe this e-wallet is ahead of the rest at present.

However, this conclusion of ours may not necessarily reflect your own thoughts on the Malaysian e-wallet race. Do you think that a different player’s at the top of the game right now? Who is it, and why?

p.s. Some people still prefer the 'old fashioned' debit or credit card. Click here to compare the best credit cards that would suit your lifestyle.