What Is Cryptocurrency and Is It Already Dying?


If you’re reading this, we’re assuming that you’ve AT LEAST read or heard about the term ‘cryptocurrency’ somewhere. But if you’re scratching your head because it still sounds alien to you (where have you been lah?), worry not for we’re about to enlighten you!

Cryptocurrency is a type of virtual currency that uses secure codes (also known as cryptography) to make it very difficult to imitate. It used to be one of the greatest inventions to ever hit the modern world, and the craze that surrounded it was beyond belief! It was the hottest news in every major media outlet, as well as the preferred topic for many Malaysians debating over a cup of teh tarik at the mamak.

But now, like all things natural in life, cryptocurrency seems to be on a steady drop… towards its own death. Before we examine why, you first need to understand how its differences compared to the traditional paper-and-metal money made it such a big hit.

How did this virtual money get to be the popular kid?

Surely there must be something about it that made it a far more superior choice over conventional currency? Well yes, there’re actually FOUR strong points that once made brands like Bitcoin, Dogecoin and Ethereum the talk of the town:

The cryptocurrency network isn’t controlled by any central authority, so no one has the power to force new or existing users to reveal their identity. The network fully processes the transactions online and it was designed to keep the financial network outside the control of any government or single company.

When you want to open an account in a conventional financial institution, you need to do it based on the regulation of the banks. Meanwhile, for opening an account in the cryptocurrency network, you set up a cryptocurrency ID/address in seconds, there are no questions asked, and with no fees payable.

Users can hold multiple cryptocurrency addresses, and they aren’t linked to any names, addresses, or other information that can personally identify you. Only the wallet IDs will be shown. While that keeps the users’ transactions private, it also lets them buy or sell anything without easily tracing it back to them.

The network stores details of every single transaction that ever took place in a huge version of an online general ledger, which is called the blockchain, and it tells all. If you have a publicly used address, anyone can tell how much cryptocurrency is stored at that address. They just don’t know that it’s yours.

Of course, as many people already know, the biggest player in this market is Bitcoin. At one point in time (December 20 2017, to be exact), the price for Bitcoin soared as high as USD19,783 per unit (roughly RM82,000). Walau can you imagine if you had bought even a few units when it was first introduced to the world in 2008, and then sold them all off when Bitcoin had hit its peak?!

Unfortunately, it seems like everything’s about to go down… 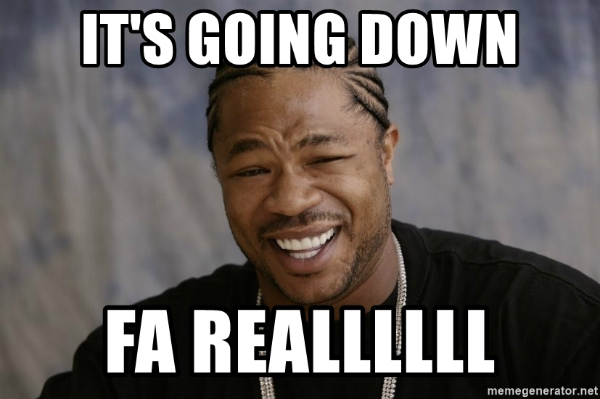 And by “down”, we mean that there’s gonna be BAD news up ahead. You see, according to a new report from Juniper Research, a technology research group, the cryptocurrency industry is right on the edge of a very big collapse.

There are apparently some very obvious signs which indicate the downward spiral, one of which is: “During Q1 2018, cryptocurrency transactions totaled just over USD1.4tril (roughly RM5.8tril), compared with less than USD1.7tril (roughly RM7.1tril) for 2017 as a whole,” the report notes. “However, by the time Q2 2018 rolled around, transaction values had plummeted by 75%, to under USD355bil (roughly RM1.4tril).”

There’s also an expected further drop of 47% in transaction values for Q3 2018 compared to the previous quarter. The researchers have claimed that when there’s economic uncertainty, it usually encourages the growth of cryptocurrency, since (as we’ve pointed out above) this type of money is supposed to remain above the arm of any government’s control.

And yet, even “strained China-USA trade relations and Brexit-related troubles” failed to create any new interest in the cryptocurrency industry, stated one Bloomberg report.

We’ve got Juniper attributing this to a variety of market pressures for causing the fall: among other things, the report blames the struggles that the market is facing on the ban on initial coin offering (ICO) advertising, tighter regulations from credit card companies, and (we knew this would happen sooner or later) price manipulation from the large numbers of exchanges that take place every minute.

So is that it, is this the end of the cryptocurrency era?

Hold up cowboy, not so fast! We simply can’t ignore the fact that cryptocurrencies and the entire blockchain technology are now getting serious attention from various institutions that they simply weren’t getting in the past.

It would now seem that influential people (read: the ones with all the power) as well as companies with serious money and huge influence want to join in on the game, BUT as with any new technological revolution, it takes time for these things to come together.

Another positive point to look at for the cryptocurrency market is that it remains tremendously disruptive. Many economists have predicted that Bitcoin and the other cryptocurrencies could soon replace the US dollar as the global reserve currency, which would then cause a great disruption to the world’s central banks and the entire banking industry.

Wah if such predictions came true in the next 10 to 15 years, then brace yourselves people! Bitcoin and all those other virtual coins could see a swift and consistent climb as the world’s primary currency for international transactions, and the way we see finance will also undergo a complete evolution.

Now you’d think that because of the promise of huge developments that will happen in this space, people would be excitedly jumping on this bandwagon. But nope, millions of crypto investors are instead not paying attention, so they fail to notice that the groundwork is being laid today for a new Crypto Golden Age.

It may not happen this year, it may not happen in the next 5 years. No one knows with a 100% certainty when the market will turn around. But history has shown that those who do their research and keep their eyes on the big picture will be rewarded in the end.

So as with all other forms of investment, you’d need to do your proper and in-depth research before you decide to jump into this industry, and as always, it never hurts for you to err on the side of caution - which means don't take unnecessary risks!
Continue reading...