Syrians & Iranians Can't Open Bank Acc in M'sia. What To Do?


Imagine you’re living in another foreign country but aren’t allowed to open a bank account there. How would you manage your daily finance? Should you keep money under the pillow?

Hate to break it to you - that’s the reality for some foreigners from sanctioned countries who are living and working here in Malaysia.

We know this first hand because some of our colleagues (from Iran and Syria) are facing the same problem. We heard their complaints from time to time - it’s kind of a bummer.

Syrian colleague: “It was very hard in the beginning for me to manage as I need to do everything manually like paying rents and bills. Whenever I want to do online shopping, I need to go to the 7E and pay. I always need to carry a lot of cash as well. This definitely wouldn’t happen if I do get to enjoy the full benefits of having a bank account.”

Iranian colleague: “Due to the sanction, I can’t do any online shopping as I can only use cash and the debit card. My usage of BigPay is also quite limited as I can’t transfer money to my account - I’ll have to ask my non-Iranian friend to help.”

A colleague’s friend who’s studying in a local university: “My family in Syria isn’t able to send money from there because of the sanction.”

Didn’t these people at the top of the chain think this through?

It’s kinda weird because these foreigners are allowed to have working visas in the country, but aren’t allowed to have this basic necessity (to open a bank account). Sounds like a bad joke, innit?

Just so you know, this isn’t a new story. Back in October 2019, many bank accounts of Iranian individuals and companies were closed. According to Reuters, this move is made due to the sanctions imposed by the United States.

Ok, hold up. What's this sanction about? And, why is it happening?

So a sanction is a penalty (read: punishment) levied on another country or individual citizens of another country to deter political distraught, financial crimes, human rights abuses, terrorism and nuclear weapon proliferation. For example, the civil war and financing terrorism in Iran, human rights violation in Sudan and zero diplomatic relationships in North Korea.

When a country is put on sanction, there’ll be restrictions and controls on the movement of goods, services and finance.

The objective of a sanction imposed on these countries is so that they can get their act together or they’ll suffer economically. It’s like an alternative weapon to war to deal with international trade and politics.

As Malaysia is a member of the United Nations (UN), we’re practically obliged to follow the sanction laws and regulations in our domestic affairs issued by the UN Security Council (UNSC).

But, but, but… what does it mean for the bank?

It indicates that they can’t establish business relationships or do transactions with sanctioned individuals, entities, countries or territories.

Oh, okay. What would happen if the banks break the sanctions?

EASY - they’ll be against the country’s laws and regulations; there’ll be consequences. Like that cringy line from our PM, Tan Sri Muhyiddin Yassin, during his speech recently, “Maaflah jika Abah ini mula menggunakan 'rotan'! (Sorry if Abah starts using the cane!).

Remember that 2019 mass closure of bank accounts we mentioned earlier? Our former PM, Tun Dr Mahathir clarified that the country has no choice but to follow. Apparently, there were threats to close Malaysia’s banks abroad if the country doesn’t obey - that would mean losing foreign markets and investment opportunities.

Also, there’s a potential to get fined by the Office of Foreign Assets Control (OFAC). In 2019 alone, they’ve fined a total of US$4 billion to four banks that didn't obey the rules and regulations.

As for individuals, if you get caught, there’s a possibility that you’ll be in BIG TROUBLE  (charged with severe legal and financial penalties).

Geez, how do these foreigners have it?

Maybe a sanction can be used to gain control and order. The idea is when the citizens make noise, this will pressure the government to do something about it. But, what if it provokes a defensive reaction instead?

More often than not, it hurt the ordinary people as opposed to government elites.

So, besides talking to the people we know, we also did some digging into the internet world just to know what others are saying about it. And based on the screenshots below, you can tell they were not happy. Who would anyway?

The loyal customer who has been dumped just like that: The one who misunderstood it as racism: 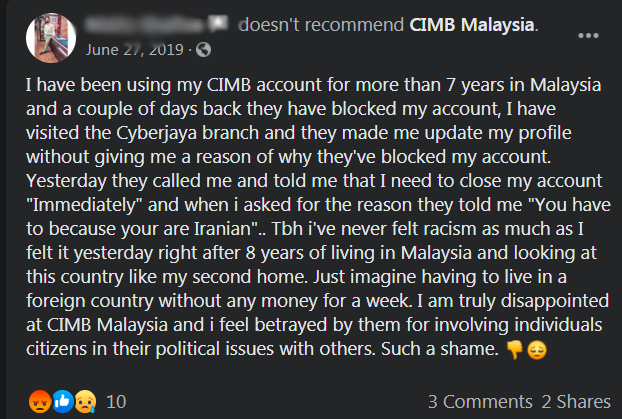 The petition cites that many services deny them not because they’re bound to do so - it’s because they would rather be safe than to ruffle some feathers.


But, not all foreigners faced the same issue. Some are still able to use their bank account… We believe that there could be an inconsistency on how the bank deals with the matter.

For example, Nourman (not a real name, an Iranian digital marketer shared that although his bank card from Maybank got blocked, he can still use his online banking to pay his rent and bills.

Besides that, Abrar (not a real name), a content producer from Syria told us that he still has both of his bank accounts (Maybank & Bank Muamalat) that he opened years ago.

“I mostly use cash now. I won’t depend on the bank much because I won’t know what’s going to happen in the coming days. They might close it sooner or later,” he said.

Humaira, a student from Syria also shared her frustration with us. She said she always gets rejected whenever she’s at the bank because of her nationality. However, luck was on her side. She managed to open a saving account with RHB Bank.

Additionally, it was also reported that those with an active account who went to the bank to inquire about the issue will get their account terminated.

So, the moral of the story here, if you’re from a sanctioned country with active Malaysian bank accounts, do yourself a favour by not visiting the bank.

For now, what are the solutions to this no bank account issue besides operating on cash?

Well, one good thing did come to help the foreigners which is this initiative by Maybank - is a non-scheme debit card to cater for payment at Point-of-Sale (POS)/ATM functions. Just remember that it can only be used at the MyDebit accepted merchants for so long as there’s a sufficient amount of cash balance in it. P/s: Do note that if you use this service, (1) all transactions are only in Ringgit Malaysia, (2) the card is not linked to Maybank2U, (3) can’t be used for online transactions and (4) can only be used in Malaysia.

2. BigPay (Or any other e-wallets)

When all is lost, luckily there’s an e-wallet. As there are many to choose from, most foreigners would often use BigPay - they can transfer their money to an international bank.

But, don’t hip hip hooray just yet. Just like banks, there’s also an irregularity with it. Some claim they can use the BigPay debit card to make payment and transfer money to another BigPay account but not to an international bank and vice versa.

If you take a look at this:

It mentioned that you can’t use BigPay if you’re from sanctioned countries. Errr, did BigPay make a boo-boo?

Also, nowadays, many e-wallets will require you to verify your details. The thing is, some e-wallets don't list down the sanctioned countries as one of the options. So there’s a potential to lose your e-wallet account.

3. Get yourself a local BFF

As this issue is still ongoing, we’ll update this article whenever we have new information (watch this space!). If you’ve other ways/alternatives/solutions that you would like to share and add, feel free to leave your comments here!

Don’t forget to also share this article with your friends, ok? Sharing is caring.