Finally, No More Queuing Up At Money Changer


With so many holidays coming, we’re pretty sure some of you are already planning to fill your precious time with travelling, right?

Be it at a luxurious holiday destination or prefer to be one with the nature and culture by backpacking or even on a tight-budget travel plan down to the very last cent. It doesn't matter.

Yup, it doesn't matter because the main factor that is going to decide your travel plan is...drum roll, please...CURRENCY. Yes, currency.

Distinctive currency differences without a doubt, could affect your travel plans, especially if the destination currency you’re planning to travel to is higher than our local currency. Your sweet dream plan would change from YOLO to SMH real quick.

No need to shy lah, that didn't happen to you alone, we’re all been there, done that. Which is why today, we have good news that could save your money while travelling with style. For real.

(Disclaimer: This is Noah Centimetre by the way, not BigPay)

Your door of happiness, a.k.a an e-wallet system with an actual Mastercard prepaid card that comes along with it and works side-by-side with BigPay Mobile App.

Since BigPay is created by AirAsia, they have been loud in promoting their baby to us. You know, just like those aunties that like to talk about their kids’ achievements. Ads here and there, even videos on Youtube, all got this BigPay thing. They even claimed BigPay can contribute to cashless way and save us time by managing our cash. Does that means no more folded money in our pockets?

Err...That’s it? Created an app just to unfold our money?

Oh, chill guys. We don’t want to jaw-dropping you too early.

For those who’re still clueless, the main feature of BigPay is to digitalised DIY foreign exchange. It’s said to be easier, simpler and CHEAPER. How to use BigPay?...Teach me, senpai!

Relax, it’s damn easy wei. All you need to know are these 3 things; e-wallet, prepaid card and Bigpay Mobile App. That’s all

Hear, hear. Once you have registered, downloaded the app and already received your Mastercard prepaid card within 3 to 7 days after registration.

Next, top up your e-wallet using the mobile app because all transactions must be done either using your BigPay card or via BigPay app. Got it?

You probably thinking why you need the card since the e-wallet app works the same. Well, the main reason why BigPay allocates the card is to make your transactions easier...duhh. Since e-wallet is relatively new to the scene, not all locations have the tech/facilities to accept e-wallet, unless you’re travelling to Wakanda. But you’re not, which is why you need the card.

Just because your travel destination couldn’t accept e-wallet, that doesn’t mean you can’t spend a dime. You can still have fun with your BigPay card at all locations that accept Mastercard… basically, that is like, everywhere.

That’s not just it, you could do anything via BigPay app like top up lah, check your e-wallet balance lah, track your expenses lah as well as your transaction. EVERYTHING, you name it.

Remember when we have problems with our cards, we have to call customer service to settle it. Or login to their website, fill in endless forms. What a waste of time.

These safety features are needed to verify your identity and to do that, you need to provide some personal information as well as your phone number.

With so many scammers out there, issa bout time we have these safety features to better secure our money. On top of that, let's say your wallet got stolen, you don’t need to call bank anymore because with BigPay, you can simply freeze your account using the mobile app. One tap and your money is safe. Jokes on you mugger!

So, what else? what’s good BigPay?

Apparently, with BigPay, we no longer need to constantly check the currency rate (just to be disappointed, again) and hunting (read: queuing) the best money changer that offers the lowest exchange rate. That’s so last season lah. It’s damn tiring you know, driving and queueing some more. It took forever just to cash out a few foreign bucks. Not to mention Malaysia is damn hot.

With BigPay, you can do it anytime and anywhere. Just top up with e-wallet and that’s it. The mind-numbing hours of process could be done within seconds with BigPay. 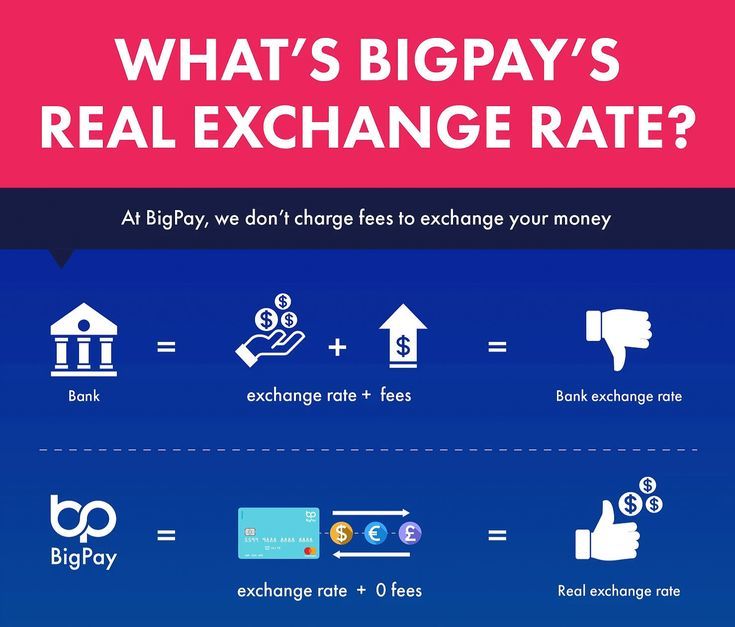 Are you familiar with Foreign Exchange Remittance (FX)?

FX is a money transfer service from  your home country to a foreign country or vice versa. Conventionally,  you have to ask remittance agent (that agent you use to transfer money) to process your transaction and every transaction will be charged accordingly based on the fee regulated by the remittance company. As if that’s not distasteful enough, your transaction will not be done automatically, but days. We’re not sure about you, but we feel tired just by knowing this.

That’s why you have to opt for BigPay. With their instant transfer using the app, it’s like sending WhatsApp. Not to mention, it’s free! Did you know, there are fees that usually charge by banks/financial institution but not with BigPay?

Here’s  what you need to know:

A processing fee up to RM24 will be charged by AirAsia for flight booking using debit/credit card.

Really lah. FYI, RM4 will be charged for flight booking using online banking such as CimbClicks, M2U and RHBNow while RM16 for Mastercard or VISA credit card. That’ll cost a fortune. All those efforts in hunting for cheap flight ticket would be for nothing because of the processing fee. In the end, you still have to pay more.

If only we can waive the processing fee right?

Of course lah we can. Just book a flight using BigPay and you’ll not be charged with the processing fee.

One more thing, a 2% transaction fee will be charged if you did withdrawal but with BigPay, you won’t be charged for international withdrawal, although ATM may include an additional charge. Fret not as you can check all fees and charges using your BigPay app. It’s transparent and hidden fees and charges will no longer haunt your money.

These are just some of the differences in transaction fees charged by BigPay and other cards. If you are keen to know more (you should), just click here to know about other charges and benefits governed by other travel card. Just remember, before making any decision, make sure the card’s features fit your lifestyle.

Not to be dramatic, but I don’t have any more cash. How?
Then don’t be. There’s no need for you to create unnecessary drama while travelling. Just visit any ATM that accepts Mastercard and withdraw money from your BigPay account.

But, just how much can I withdraw?
As much as you want as long as you have the money lah. Either you travel like a king or a pauper, that all depends on your account.

Before we forget, every withdrawal has its own charge;
So, we advise you to only use this feature when emergency situation occurs such as your wallet got stolen/lost or maybe you want to shop some bags or clothes on sale but have no cash. That’s emergency situation too okay.

Read here: Lost Your Credit Card While Travelling? Here’s How You Can Get Emergency Cash! As if that requires more explanation. We’re pretty sure you know how to do this just as much as us.

Any transaction you made, regardless via app or card will be rewarded with points which is based on the collaboration between Big Loyalty Program and AirAsia.

Earned reward points are useful to get AirAsia Travel Rewards such as redeem/discounted flight ticket, in-flight meals discount, baggage discount and many more! With all these rewards, it seems that Christmas comes early every year. Yass!

Just link your AirAsia Big member ID to your BigPay account and you’re all set! Spend at as low as RM20 and you’ll get 1 point.

Just when you thought good things have come to an end, BigPay surprises you even more. With BigPay, you can earn money for free. Just ask your friends to sign up using your referral code and in no time, both of you and your friend will receive RM10 each in respective BigPay account - can make money, you know.

Imagine this, 10 people signed up using your code, just like that you’ll get RM100 without hassle. Maybe this could be your new side income? Who knows?

So, how about you give it a try?

Nothing else to talk about except for you guys out there to try this new thing. C’mon, give it a shot, it doesn't hurt to try. Experience these amazing features yourself,okay.

One more thing, travel is all fun and awesome until something unexpected happens. Therefore, avoid this by protecting yourself with travel insurance. Calm down, it won’t put a dent in your wallet but rather protect yours from one. Click the picture below to know more and to apply for one.