As of 1 December 2014, the government’s decision to remove subsidies and introduce a managed float system for prices of RON95 petrol and diesel have sparked some discussions over what may materialize from this change.

On top of the many queries on GST implementations, other questions may point at where all the nation’s funds and savings dissipate to.

The big question: Is removing fuel subsidy a bad thing for Malaysians?

It is significant to note that this change is based on a “managed” and not “free” float system. This indicates while petrol prices reflects the world market, all petrol stations in Malaysia would offer the same rate.

You can cross out station hunting for cheap petrol on your to-do list.

The question is how this managed float system dictates the petrol price we pay for.

The government has claimed that pump prices are determined by a 10-day average of fuel prices based on the international traded markets plus fixed profit margins for the refineries and retailers.

So, prices are expected to change only every month. Some have expressed their concern should the 10-day average be recorded when pump prices are at its highest. Cooperatives and Consumerism Minister Hasan Malek has assured that the average of the last 10 or 11 days of the month will be recorded in the final retail price if there are significant changes in prices in the first 19 days of the month.

Despite the response, individuals remain suspicious of the reflectivity of pump prices on the world market.

The lag in the pump price downfall led to arguments that the government is shielding the producers and its revenues and royalties despite the plummet in the world’s oil price.

Singapore’s Esso pump prices has been lowered 4 times in the past 4 weeks in October 2014 and that draws some comparison to us.

Obviously, this sparked up some debates over comparative efficiency of Malaysia and our neighbour.

Data extrapolated above indicates that the subsidies for Ron95 has been decreasing until November 2014 as a result of fall in market price. 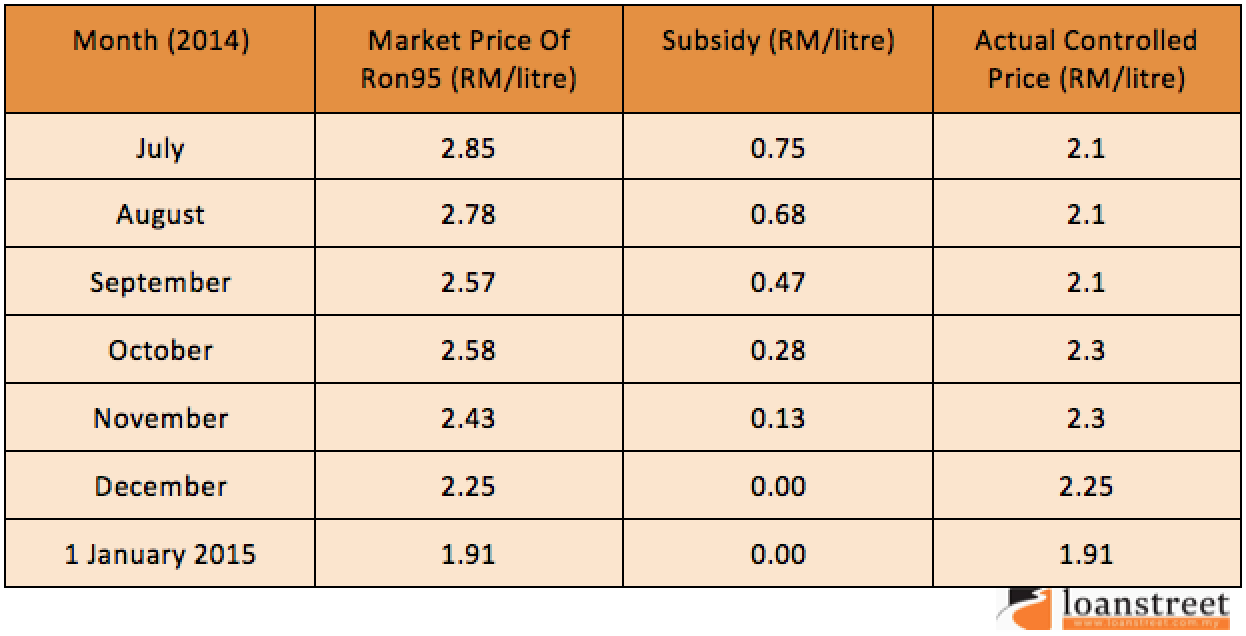 With Vs Without Subsidy

As mentioned, December 2014 marks the removal of petrol subsidy but for argument sake, let’s assume the controlled price is still RM2.30. With the market price in December being RM2.25, petrol consumers are effectively paying RM0.05 ‘tax’ for every litre they pump in. Same applies to January 2015, where market price has plummeted to RM1.91 and consumers would have to fork out an additional RM0.39 per litre to the government.

Does it seem diligent to pay for ‘tax’ when the rest of the world are paying lower? No, as long as the world market price does not spike up, a subsidy removal would do us good.

Table below demonstrates the downside of the plummeting oil prices and its corresponding positive outcome following the subsidy removal. Why are oil prices falling anyway?

Well, it really boils down to the supply and demand parallax.

Many alternative stories have been brought forward but we will not delve into that too much. For opinion on this have a read of our article Why are Oil Prices Falling?
We cannot read into the future but for now, the drop in price has certainly helped alleviate the rakyat’s dependency on subsidies.

This state of transition inflicts many levels of discomfort to each individual.

The new policy changes may be seen positively or negatively; discussions merely express our thoughts and views but all we can do is play the waiting game. This is a phase that our nation has to go through and all of us would have to adapt.