Smoker on a Budget: Cigarette, Rollie, Vape or IQOS?


DISCLAIMER: We’re not in any way promoting smoking in any form (cigarette or vape). We’re just here to educate you guys on this matter. Nothing wrong, right?

We have a story to share about a heavy smoker named Afif. This bad habit has been going on for 6 years now and he has been spending around RM4,343.50 annually (one pack per day!). And, not to mention the future expenses for lung cancer (touch wood) - way too expensive!

So, we decided to help Afif with some calculations lah on how much he’ll ROUGHLY spend annually...

1. If he were to cut down on his current cigarette consumption...

So, at the moment, Afif is buying a pack of cigarettes every day. Let's say he’s smoking LD which cost him RM11.90. That’s a total of...

But, if he can cut down his consumption to a pack for 2 days (15 packs a month), he’d save some cash and gain additional life points (maybe).

2. If he were to buy cigarettes from the black market?

We get it. Afif doesn’t exactly have any malicious intent, he just wants to save some money. And the black market’s cigarettes are usually under RM10 per pack.

Of course, he can cut a lot of costs but we don’t condone this lah. This is because they may contain other impurities, you know - they aren't regulated. Not to mention, it’s not helping our economy leh. When more people buy black market cigarettes, they’ll not be taxable. Indirectly, it also means the gahmen will suffer from this. No tax, no money lah. Don’t believe it? Read this: How Does the Shadow Economy Affect Malaysia’s Income Tax?

Anyway, going back to the topic. So, if Afif were to buy a pack of John D-Blend cigarettes from the black market, it’ll cost him RM4.50.

Here’s the calculation if Afif buys a pack for every 2 days, which means he’ll roughly buy 15 packs in a month:

But, if he were to continue smokes one pack a day:

So, he’ll still save some money, but ethically speaking, is this a good option tho?

3. If he decides to roll some cigarettes

A lot of people said if you roll your cigarettes is better in terms of money and also health-wise because it’s “natural”. Well, hate to break it to you, but it’s just as risky as a pack of cigarettes. 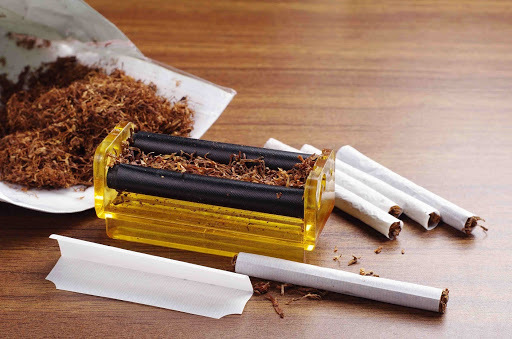 Since this is part of Afif’s consideration. Let’s see how much he’ll spend.

First, he needs to buy a roller machine because we’re assuming he doesn’t know how to roll yet. This will be a one-time investment thing. He could go for Mascotte Roller which is around RM12.

Next, what he needs are loose tobacco, rolling papers and filters:

So, we found that 30grams of shag (tobacco) produces around 60 rollies. That means, with 40gm, Afif can have 80 rollies.

If he’s going to cut down his consumption and maintain 10 sticks a day (310 sticks in a month), he’ll need to buy at least...

Note: Some rolling tobacco brands come with free-rolling papers. But, for the sake of calculation, we’re going to assume he buys separately.

Okay, to conclude, Afif we’ll need to spend around RM90.20 monthly, which is way way way cheaper than smoking a box of cigarettes. But, still cannot beat the black market ones lah.

With this option, Afif’s costs for smoking in a year would be roughly around RM1,082.40. That’s 75% less than his current spending (as pointed out in point 1).

Besides that, Afif could also buy the cheapest non-brand tobacco which is at RM2.50 for 100g of tobacco. He could even take it up a notch by rolling it with leaves, instead of the usual papers. We had a reader who shared her cost on this (refer below image). According to her, you can get the tobacco it at Aceh shop, RM2 shop or CLC Supermarket.

4. If he settles down with IQOS…

IQOS looks like other e-cigarettes. It’s a long, Sharpie pen-shaped chargeable device. The far end has a port where smokers put a roll of tobacco that looks like a short cigarette. How much will this costs Afif?

For monthly expenses, Afif needs to spend on the heat sticks. One pack (20 heat sticks) would cost RM14. He could also get a carton at RM140 (10 packs). According to Phillip Morris, the experience lasts about six minutes or 14 puffs, which is equivalent to smoking one cigarette.

So if Afif is cutting down, he’d stick to 10 heat sticks a day (15 packs a month). Which means he’ll need to fork out…

Honestly, although this option is said to be “safer” because the levels of harmful chemicals are significantly reduced, it doesn’t seem to be doing well in the I-want-to-save-money department.

Another option that Afif can go for is vaping. Many smokers are flocking to it to quit smoking for good. That said, there are no studies that revealed the claim is true lah. In another note, some of our friends also did mention that it can cut costs, which is Afif’s goal here. So let’s see if it’s true.

First, do know that there are many types of vapes out there. And, they have different kinds of costs and maintenance. For Afif’s case, let’s take a look at the calculation for the common types like: This type of vaping device is said to be the easiest to manage because all you have to do is change the pod once the coil burnt out and refill the liquid. Simple, right? Great for newcomers. But, what about the costs?

We did some digging on Shopee. For example sake, let’s assume that Afif will go for the Aladdin Pro Pod Kit which is priced at RM59.90 as a one time purchase. Take note that there are cheaper devices in the market.

As for the e-liquid (juice), there are 2 types to consider - freebase nicotines and salt nicotines. The latter has a higher nicotine level without getting the rough throat hit. We’re not gonna go into details about the differences, so you can read it HERE if you want.

In Afif’s case, he decided he wants to go with 50ml freebase juice with 50mg of nicotine which is at RM15 per bottle. We asked around about how long it will last, and the majority said it can last about 2 weeks for a heavy smoker. He’ll also need to change his cartridge every week (RM10 per cartridge).

So, every month he’ll spend:

That means, in a year, he’ll fork out RM840 for this option. This device allows vapers to make customisation like the tanks, coils, drip tips, wattage, different ohm levels, which can be a little complicated for beginners. It’s also a little bit pricey. As for weekly maintenance, Afif has to think about re-wick and recoil. So, it can be a put off if he doesn’t like things that are mafan. Having said that, he can give it to the vape shop to do it for him for a small fee.

Here’s the breakdown if Afif is going with this type of vape device:

The expenses for this option would be RM864. They are similar to the pod system vapes. The difference is that AIOs (mostly known as pod mods) come with replaceable organic cotton coils (occ) while pod vapes come with disposable cartridges. Great for newbies and also those who are looking for similar performance and features of a mod vaping device. But, what about the costs?

Okay, for a start Afif needs to get the device, of course. Let’s go with the Artery Pal II PRO Pod Mod Starter Kit which is at RM39.

For monthly maintenance, he needs to change the OCC. We found out that he’ll need to at least change it once a week from this article. A pack of ARTERY PAL 2 OCC (5 pieces) is at RM11.50 on Shopee - that’d be enough for a month. And, for the juice, he’ll go for the freebase liquid (50ml, 50mg) at RM15 - which he’ll need to buy every 2 weeks.

So, overall his monthly expenses would be…

In a year, he will spend about RM498 only! That smells like a lot of savings to us.

Alright, based on the calculations, which is the best, financially?

Well, when it comes to money, the AIO type of vape would be a better option. The device is affordable and the monthly expense is less than RM500. If he were to splurge a bit, it’d probably cost him an additional RM100.

Even the black market cigarettes costs can’t beat that!

Based on his current spending, Afif would be able to save RM3,843.50 in a year for this option. He can use this money to invest in fixed deposits, gold, ASB, etc. to diversify his savings, especially during this pandemic.

Additionally, he might also get some extra points for life expectancy, you know.

Of course, it would be better financially and health-wise to just quit smoking lah. But, we’re all adults now, so pandai-pandailah k.

How about you? Are you a smoker yourself? Share with us what would you go for in the comment section here. After all, sharing is caring.