Ugh, Someone Double-Parked My Car! Who Can I Call?


A survey conducted by Nielsen revealed that 54% of Malaysian households OWN MORE THAN ONE CAR. No wonder lah so many people double-parked, especially in the high-density areas such as Bangsar Telawi, Damansara Uptown and USJ Taipan - not enough parking space!

This problem has caused many road dramas. We don’t know if you guys still remember this, but somewhere in 2018, there was a really kecoh scene involving a Toyota Hilux with a Honda City. Long story short, the abam Hilux (the victim) got so mad because he’d been honking many times to alert the Honda City owner to the point he lost his patience and hentam that car FOR 5 TIMES!

If you’ve been a double-parked victim before, we’re pretty sure you’ll be satisfied with the abam Hilux’s action. Having said that, what he did was WRONG and he could be fine RM300 for causing property damage.

Actually, there are other ways to solve this without getting in trouble. So, hold your temper and read this.

What’s the right thing to do? Call abam polis?

Well, based on the Royal Malaysia Police (PDRM)’s Facebook statement, we should call them in case someone double-parked our cars, as stated in the Section 48 (1) of the Road Transport Act 1987. By doing so, the police will clamp and tow the car that’s blocking yours.

…our abam polis can’t really solve this issue. Based on what netizens say, whenever they called for help, they got passed around here and there such as to the city council and premise owner (if they parked at mall/office) instead. Aiyya… why like this? Tension, you know.

So, if the abam polis cannot help, who else can?

Opps...wrong police! No wonder they CANNOT do anything about it.

Next time, if you got involved in any road issue i.e double-parked and accident, you need to call the traffic police and not the normal police - the one wearing white uniform on the road. 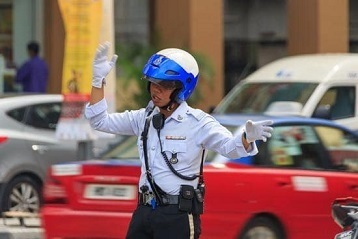 You can still issue a complaint to abam polis, it’s just that the officer will still follow the normal procedure in handling your case. You’ll have to file a report at the police station. And, since this IS NOT under their jurisdiction, they’ll just refer your case back to the traffic police department.

To avoid wasting your time and lose your cool, we advised you to call the nearest traffic police station (if you have lah) or the general line at 03-2071 9999, right away.

Besides police, there are other authorities that you can ask for help...

… such as Road Transport Department Malaysia (JPJ) and city councils such as the Kuala Lumpur City Hall (DBKL) and Petaling Jaya City Council (MBPJ). Here are the related authorities’ (within Klang Valley) contact number for your future references:  But, which one to call? For verification, we called MBPJ. The representative said the authority that you'll need to call depends on where the incident is happening. For example, if you got double-parked at Petaling Jaya area, you should call MBPJ. If you're in Batu Pahat, then you call the district's municipal council lah. Get it?

“What about police and JPJ? When should we call them?”

About that, they’ll revert your complaint to the city council, unless they were nearby when you call them. If that’s the case, don’t bother lah, just call your local city council terus.

But, what if I’m the one who double-parked? And then my car got smashed/hit. What should I do? Can I claim my insurance? Yes, you can. You can make a claim under Own Damage (OD) Claim that for the damages. But, please be aware that if the police investigation shows that you're AT FAULT, do know that your No Claim Bonus (NCD) will be affected.

Just file a police report and call your insurance provider immediately. After that, send your car to the insurance panel workshop. Once that’s settled, you need to prepare a few supporting documents to submit your claim.

Documents to prepare:
Check out this article to know more about the process: If Someone Hit Your Parked Car and Run Off, Can You Claim Insurance?

Err, what happens if I ACCIDENTALLY HIT the double-parked car? 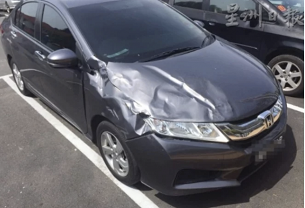 It’s still your fault for causing property damage. But before you start cursing, you should know that situation is up to the police discretion. Nevertheless, there are two possible ways for you to solve this kind of situation:

For the first one, it’s totally up to you on how you want to kawtim with the car owner. However, if you decide to settle it properly, you still need to follow the same claim process - file a police report, inform your insurance provider and prepare the supporting documents like we’ve mentioned earlier. Whatever it is, make sure you don’t hit and run. It’ll only get worse if you do that.

We get it if you don’t have a choice and need to block other people’s car but please don’t be a pain in the rear end. Make sure you leave your contact number. Besides that, shift your gear to Neutral and release the handbrake - easy for people to push your car.

However, not all cars work the same in this case. The newer cars usually have a safety feature that doesn’t allow you to switch off the engine/lock the car/remove the car unless you put the gear in Parking mode and pull the handbrake. Relax, there’s still a way to do it.

Source: Bayang Cerita
One more thing, to avoid your car becomes a rage victim, especially when you’re not around, make sure to install a motion sensor dashcam. Other than that, get a car insurance that fits your lifestyle. Click the image below to know more.