Which Is the Richest Race in Malaysia?

We have the feeling that many of you will say the Chinese. No doubt - there’s this perception that all Chinese in Malaysia are wealthy, right? But, how true is this seeing that Bumiputeras have a lot more privileges for example school admissions, government contracts, and unit trust schemes that could propel them further economically?

Oh boy, is this going to be a controversial topic or what!

Okay, before you get all heated up, please know that this article serves to present facts and not any sort of discrimination (but it does surface in terms of inequality at the bottom. Read through to know what we’re referring to). So please enjoy this article with a pinch of salt and perhaps this may inspire you for world domination!

Okay, real talk, are the Chinese really the richest?

Well, according to Tun Dr Mahathir, the Chinese are a “wealthy lot” and that it was “unhealthy” that they live in urban areas. The Star mentioned this alongside a rebuttal from Tan Sri Goh Tian Chuan saying, “Politicians, especially, should always be more cautious when they speak in public and refrain from making such an inflammatory remark. It may go out of control and incite hatred and animosity against Chinese businesses, and rip the nation apart.”

Now with all that being said, let's dive in a little deeper to see if Mahathir had a fair point or if Tan Sri Goh Tian Chuan was right.


What does the data say?

According to the 2020 Forbes Malaysia Rich List, the richest man in Malaysia has a net worth of US$11.5 billion (bn)! That’s roughly RM46.4 bn! Only about US$50-ish bn short from Jack Ma.

As you can see, the majority of the wealthiest people in Malaysia are of Chinese descent taking 9 out of 10 spots! They amount to nearly US$50 bn. That’s enough to buy 10 billion burgers from McD! And enough to feed every single Malaysian with two burgers a day for half the year!

Now let's take a look at the top 50 wealthiest people in Malaysia and compare the wealth based on ethnicity here. We found: WOWDA! Almost three-quarters of the richest Malaysians on the list are of Chinese descent!

Super atas people aside, who brings back more money generally? 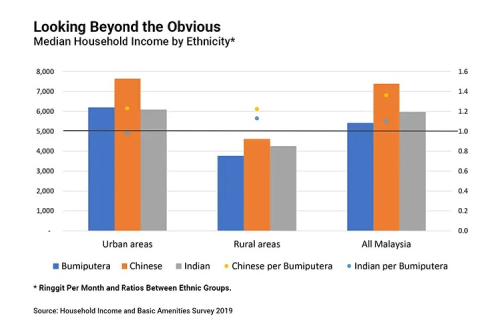 Median Household Income by Ethnicity In Malaysia In 2019


Based on the Malaysian Department of Statistics’ 2019 Household Income and Basic Amenities Survey Report above, the Chinese ethnic households in the urban areas had the highest median household income close to RM8,000 which is over 20% more than the Indian and Malay households.

But, these numbers don’t add up because even without statistics, we know that the Bumiputera holds the majority number of people in Malaysia. You would assume with the number of people and the privilege they have, they would at least bring back a higher average, kan?

Let’s look at some hypothetical numbers...

There is no conclusive research or evidence to support this math, but let’s do it for fun and try to see who is richer. 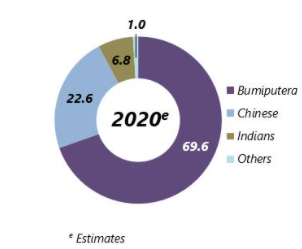 We will start by taking Malaysia’s population of 30 million people. Based on the median monthly household income by ethnicity by DoSM, we can calculate the average wealth by race. We also have to take into consideration that the average household size is 4.31 persons.

Again, please bear in mind that this is a really rough estimation as there is no concrete household size by race and no in-depth study being done here. Do not quote us!

Based on this rough calculation, the Malays outperforms the Chinese household by more than double the amount. Let’s not even talk about the Indians who are treated unfairly socio-economically. Again, this is a rough estimation based on population, so it makes sense that the Malays do have the majority of the wealth. However, that’s not reality.

Based on these insights, we can conclude that even though the Malays presumably should hold the majority of the wealth, they also stand to be one of the highest in the poverty rate. It’s definitely an issue that needs fixing.

And the crazy thing about all this is that the top 2 richest people in Malaysia, as listed by Forbes, have way more wealth than all the ethnicity groups combined! Let’s first define inequality or more specifically- income inequality. Investopedia defines it as “how unevenly income is distributed throughout a population.”

In this context, does race play a part in income equality?

Well, to answer this question, we must identify and understand what are the determinants of income equality; and relate it to the data we’ve gathered, as well as the current situations happening in the country. Teach For Malaysia stated on their website that educational inequity is a massive problem that is caused by deep-rooted factors. One of them is the systemic factor. Here we look at systemic poverty. Systemic poverty in itself isn’t just a single individual experience but has a direct economic and social exclusion of people. According to Korbett Mosesly, there are 7 top factors of systemic poverty. In this point, we look at institutional racism and rural isolation.

Let’s first look at institutional racism in education - that is the accessibility of education. One of the major setbacks is that our education adopts a race-based quota system. Matriculation has a wide range of benefits ranging from graduating earlier and being incredibly cost-effective BUT only 10% of their intake is allocated to non-Bumiputera.

What about rural isolation? According to The Kalsom Movement, students in low-income families tend to be in lower-performing schools. These lower-performing schools can usually be found in rural areas such as Felda settlements. According to academicians Melor Md Yunus and Siti Sukaimah Che Mat, the English proficiency in Felda are extremely low. Seeing as that most jobs (especially higher-paying) require conversing in English, this automatically puts them at a disadvantage.

And how does systemic poverty affect an ethnic group’s wealth? The Edge Markets reports that there is a large population of Bumiputera in the rural areas - 27.4% which is higher than the national average of 20.2%. The Chinese only have 6.4% and Indians at 5.5% in the rural areas.

This study indicates that students without quality education potentially have fewer life prospects, lower initial and lifetime earnings, and an even higher risk of unemployment. With all this, we can infer that since the Bumiputera has a higher poverty rate and occupy a large portion of the rural area, hence the quality and inequity of education doesn’t allow them to break out from this vicious cycle and gain better income opportunities. After the infamous race riots of May 1969, the Malaysian Government implemented policies designed to favour Bumiputeras in 1971 in the New Economic Policy (NEP) giving them exclusive rights because the government wanted to eradicate poverty and redistribute wealth.

We’ve all been in debates and arguments that Bumiputeras/Malays get cheaper house ownership, IPO’s, education, ASB and many more. But still, the income bracket between the Malay/Bumiputera community falls lower than the other majority races according to the median household income based on our previous point.

Instead of closing the gap between the races which was the intention of the NEP, it just brought upon more “affirmative discrimination” and greater resentment by those deprived of such policies.

Now, let’s see what do the Chinese people have. They don’t have a specific privilege per se but what they do have is dominance over the business sector. Based on this research, the reason why Chinese might be better in business is because of the practising of “GuangXi” (forming personal relationships) that “facilitates the business in terms of opportunities and cost of doing business since it is based on trust rather than contract.”

As for the Indians and Others, they definitely need more attention from the community and government to make it fair game for everyone because as of now, it seems like there aren’t any benefits for them at all.

There was a study done in 2016 about discrimination in graduate hiring between races. Candidates’ applications were sent to various companies with the same qualifications such as language skills and experience but what played a major role in this study was their race.

The study showed that the Chinese are 3 times more likely to get callbacks compared to their Malay friends and 4 times more than their Indian counterparts. What’s more interesting in this study is that Mandarin-required companies are 5 times more likely to hire a Chinese instead even though they both have the same competency of Mandarin. It’s suspected to be a filter to hire Chinese graduates but it sure doesn’t seem like it! What we also found most disturbing is that wearing a hijab in your resume decreases your odds for callbacks, that is just plain discrimination. But, why is one race favoured over the other? For one, it could be that candidates are negatively judged by their race which can be due to stereotypes or reinforced by past experiences. Secondly, it can also be the result of pro-Malay affirmative actions meaning that people tend to think that Malays have lower-quality education and higher opportunities in the public sector anyway. Basically, discrimination all-round lah.

Actually, it's not about which race is the richest... In konklusi, if you scrolled down before reading the entire article, you’re not gonna find the answer to which race is the wealthiest (don’t be lazy and READ!). Instead, we will say that there is definitely inequality and inequity in the racial wealth divide because of the introduction to certain policies and the general social structure of Malaysia.

There are bigger questions to ask: How do we solve this problem and eradicate income inequality between ethnicity in Malaysia and instil equity treatment between everybody? Is it impossible to achieve?


* The views, thoughts, and opinions expressed in the article belong solely to the author, and not necessarily to the author's employer, organisation, committee or other group or individual. The above article is intended for informational purposes only. Loanstreet accepts no responsibility for loss that may arise from reliance on information contained in the articles. 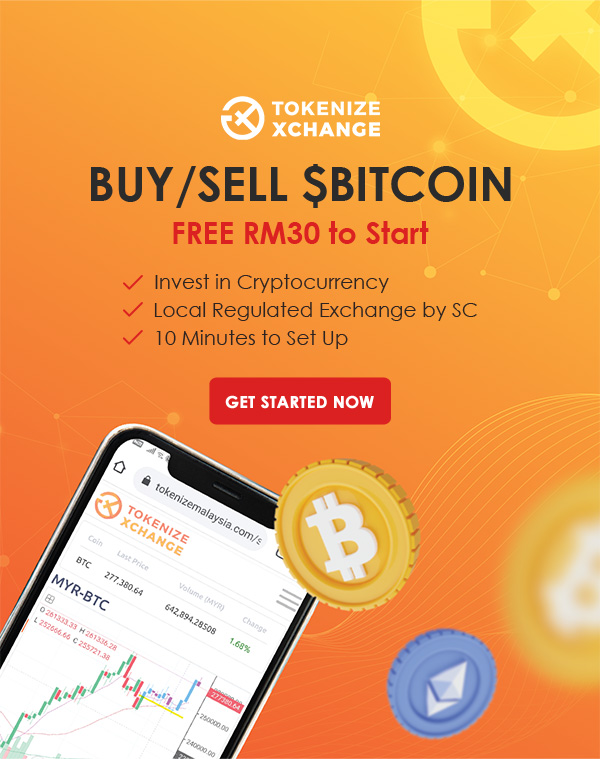