Should you pay back your car loan early?

The essence of this rule may not look as glamorous to borrowers as the name sounds. The rule of 78 was previously introduced by us in another article, please refer to the article “How Banks Fooled You with the Rule of 78” to fully understand the idea. For the interest of time, we will give you a brief idea of what the rule means.

If you have read our article “How Banks Fooled You with the Rule of 78”, you would have seen the example where 73% of the total interest payable is paid to the banks by the 6th month in a one-year loan that uses rule of 78 method.

So how does this apply to a car loan? We will explore how much interest can be saved by making  an early settlement in different life stages of a the loan. We expect that the later you make early settlement, the less productive the settlement is. The effect is caused by the rule of 78.

Using our car & personal loan calculator, the early settlement amounts to RM34,684 with a total rebate of RM4,209. Based on our own calculation using cash flow method, the effective interest (per year) saved due to early settlement is 4.33%.

However, if we decide to make early settlement after we have already paid 60 months of installments, the result looks very different:

How does this make sense to you? Well, if you invest the same amount of money in Fixed Deposit instead of paying off the early settlement, you will earn an approximate return of 3.3%. Alternatively, you could also invest in unit trust or stocks which might potentially give you an average return of 6%. Looking purely from a financial perspective, you would not want to make the early settlement in scenario 2 because you could easily make return higher than 0.55% by investing the money in financial products.

We have made two charts to illustrate our points above. Both total rebate from settlement and effective interest saved decrease exponentially as we make early settlement after we have paid more and more installments. 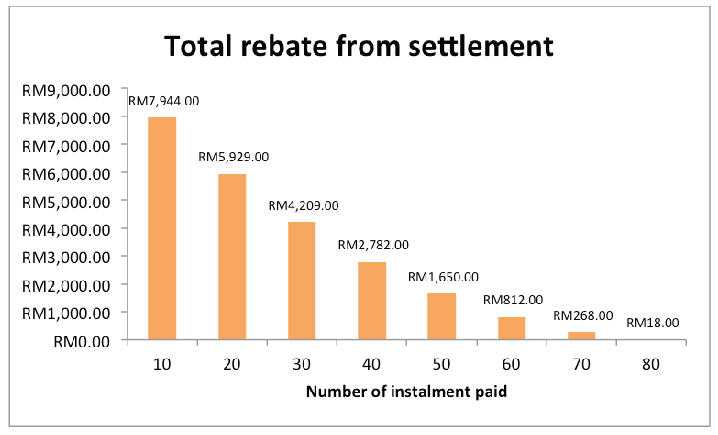 How do you make a decision?

In the discussion above, we introduced you the brief concept of rule of 78 that is popularly used by banks when giving a car loan and personal loan to borrowers. Rule of 78 benefits the banks because borrowers would pay more interests at the initial stages of an installment period although the amount of monthly payment remains the same. Therefore, when you make an early settlement after the initial stages, you would have already paid a hefty amount of interests to banks.

Do consult us before making decision on whether you should make an early settlement or use our car loan/ personal loan settlement calculator to find out the total rebate from the settlement.