So, a long time friend that you lost touch with for the last 10 years gives you a call and asks to meet up at Starbucks. After some small talks and all that, he/she then introduces a new revolutionary product and sketches out the marketing plan using neat little circles on a piece of paper and explains how you stand to get rich by selling it. Throw in jargons like passive income and downlines, you suddenly realise you’re beginning to be sucked into the dream they are selling called Multi Level Marketing (MLM).

No judgment. We get it - living is getting expensive, so if you can get some extra income, why not, right?

And now, you’re curious. You probably have a few questions in mind like, “Is MLM bad?”, “Is this practice legit or is it a scam?” etc. Well, you’ve landed on the right page. Read on to know if you can be rich and if it’s the right opportunity for you to make extra moolah.

First, what is MLM? Is it a legit business model?

Also known as network or referral marketing, MLM is a distribution-based marketing strategy that contains two or more tiers of commission overriding (depending on the company). It offers the opportunity to become involved in a system for distributing products to consumers.

In other words, MLM companies build and manage their sales force by recruiting and motivating independent distributors to go out and sell products - REAL products from dietary supplements to kitchenware to beauty products. Some of the brands that you might be familiar with are Avon, Amway, Mary Kay, Herbalife, Cosway, Tupperware, etc. 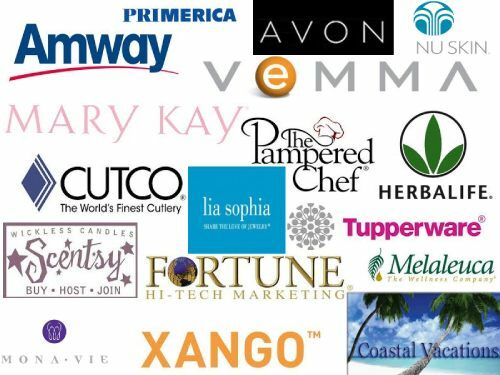 It’s easy to see why people are tempted to join MLM businesses. Unlike a person starting a business from scratch, you don’t need a huge capital to join in. In a statement, Lawrence Cheah, Direct Selling Association of Malaysia (DSAM) Executive Director shared that the ‘starter kit’ for legit companies is usually below RM200 (sign up fee will be the price paid to purchase the product).

That said, there also some companies that only don’t require you to make a minimum purchase upon registration, like NuSkin, for example.

On top of that, the MLM participant has the support from the direct selling company that supplies the products and sometimes offers training as well. So nice, right?

Basically, the goal of MLM is to move products without extra costs like marketing collaterals, but using the network of distributors instead. The more product the business will be able to sell, the more money they’ll make.

In Malaysia, there are about 253 licensed MLM companies (as of 2015) - which means MLM is legal in Malaysia. The companies need to register with the Direct Selling Association of Malaysia (DSAM) and are regulated by the Minis­try of Domestic Trade-endorsed Code of Conduct.

So, MLM is NOT a Pyramid Scheme?

NOPE. Many MLMs blur the lines between being borderline scammy versus being legit direct marketing companies. There are some telltale red flags to watch for. The more red flags that are checked, the more the MLM borders on being a scam.

Here are some differences between MLM and Pyramid schemes:


Also, take note that although MLM itself can be a legitimate distribution strategy, many MLM companies have shady/exploitative practices and schemes. It’s almost like they were set up to make money off its distributors than from customers outside the network.

There are also concerns that some Pyramid schemes try to disguise themselves as legitimate MLMs. So how can you know that this is happening? Here are some red flags to watch out for.


Take LulaRoe (an American MLM clothing company), for an example. In October 2017, this company kena class-action lawsuit for being a pyramid scheme. Apparently, it required distributors to pay an onboarding fee and invest in stock to join (which could be up to US$9,000). Not only that, LulaRoe consultants were encouraged (read: pressured) to recruit new members so that they can receive bonuses that are based on how many new recruits (who also need to pay tak masuk akal fee) they brought to the company. Malaysia also got a  case - A local daily reported that the Penang Domestic Trade and Consumers Affairs Ministry raided an MLM company (they didn’t mention the name) and seized RM201,136.00 worth of health products. The company was charged under Section 4 of the Direct Sales and Anti-Pyramid Schemes Act 1993 for conducting direct sales without a valid license.

According to the State Director, it was likely that the company, which has a license for retail sales, had resorted to direct selling and pyramid scheme to rake in faster profit. On top of that, it also attracted members by offering lucrative bonuses with the sales of the health products, which are priced KAW KAW - from RM500 to RM3,000 per product.

You must be thinking, “Aiseh, how to know if this MLM business in Malaysia is legit onot?”

But, can you really make money from MLM? Confirm ah?

Based on the business model, as an MLM distributor, you’ll make money from two revenue streams: This means the more downlines a distributor has and the products are selling like hotcakes, the more money they will be making. Do this enough times and you’re a dancin’ millionaire, right?

Well, let’s take a look at the compensation plan from the largest MLM company in the world, Amway, for an example...

As an Amway distributor, your income is linked to overall sales and is calculated using a points system rather than per unit or purchasing cost.

NOTE: Here are some terms Amway use in their business:
Anyway, according to Amway Global, you can make money from:

Distributors are able to sell their products at a mark-up (the difference between cost and retail price) to earn a retail margin on the sale. They can set their own prices, but Amway does establish a suggested retail price for every product it sells.

But, don’t forget that you have to invest in 90 units of the said product which will cost you RM9,000. Now, we believe that this can be a significant risk for you to take as a distributor. You'll only turn a profit if you sell most (or all) of the items that you buy for at least as much as you pay. Plus, the products from Amway aren't especially cheap (RM37.80 for a deodorant!) even when discounted - definitely not for the mass market.

As a distributor, you can receive monthly bonuses based on your sales volume – how many products and what types of products you sell. This surely sounds great because you can earn some bonus income simply from sales – even if you haven't recruited anyone. You could even get your bonuses fairly high (in theory) just by simply making enough sales.

As your business grows and new members join your group, you’ll receive monthly bonuses based on the product sales volume of your team. This is where most of the income potential comes. As for your downlines, they won’t be getting anything because each of them has low PV so they’re not entitled to the bonuses.

Bear in mind that this structure is only effective if you can get a decent number of people under you and ensure that they're making sales - the idea is the more downlines you have, the more money you make. On top of this, you’ll also be awarded growth incentives for reaching key business-building milestones, such as one-time cash awards and business trips.

“Sounds good wor. So, I can make money lah, right?”

Yes, you can make money with Amway or any legitimate MLM companies because the formula is somewhat the same. After all, there are some untapped markets and you might find your own unique sales angle. But, is it a reliable income? NO - yeah, they give a few structures for you to make money but the chances of being successful are pretty slim.

Based on Amway’s 2017 Business Reference Guide, it stated that the average gross monthly income for active distributors in 2016 was just US$207 a month (and only around 48% of distributors were considered active).

Uhuh, you read that right - US$207 a month. Okay, having that extra cash monthly might sound nice, but it's a far cry from being able to make you rich, people.

And not to mention, it’s not going to be instant and will take a lot of hard work. It’s an uphill battle - and by that, we mean VERY STEEP uphill; almost like Hunger Games level.

Just take the example we gave earlier. You need 100 people (10 generations) in your team to spend RM100 each to make an extra RM660 and we haven’t deducted your operating expenses yet. If you want more money, you need your downlines to spend more.

First of all, let’s talk about recruitment. It’s not easy to find people who will not be discouraged when prospecting. Persuading your friends, family or total strangers can be awkward AF because you also have to overcome the immense hurdle of MLM’s not-so-good reputation.

Yeah, your up-line may give some you motivational meth pep talk and believe that you can succeed in this MLM business, but in reality, they just need your money coming into the system in order for themselves to succeed.

That’s what makes it iffy - it doesn’t matter whether your downlines are making profit or loss, the money they spend will feed the system. Below is an example of a graph to give you a good idea of what we’re talking about. 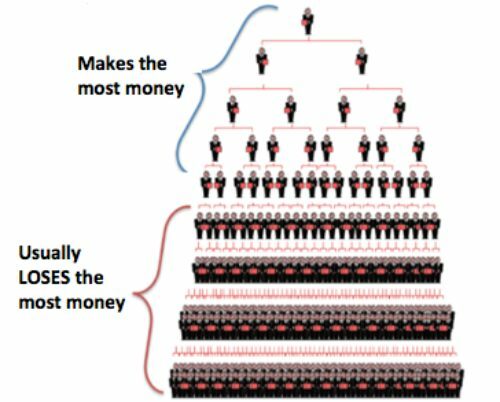 Second, we feel that the sales you’re making AREN’T SUSTAINABLE. This is because they’re not market-driven. Most of the products ordered are by the members for personal use or to achieve volume targets. Which makes sense, right? If very little money is coming from outside the network, then the only way for you to profit is at the expense of people in your own down line (if your downline is a boleh-pakai type lah).

Which explains why 44% of MLM participants worked at it for less than 1 year. People quickly drop out because they’re either not making enough money or are spending too much on business expenses. So, they are unable to turn a profit. The same study also shared that ONLY 25% of participants made money from MLM.

To add, in a book called MULTI-LEVEL MARKETING UNMASKED, the writer shared that about 99% of people who join MLM companies lose money.

Okay, by theory, the MLM mode of operation is simply more cost-efficient and easier to run, but NOT in reality lah k. Plus, a lot of people have formulated an opinion on it already- they’ve probably known someone that started this before and failed, or have been annoyed by family/friends about it.

Having said that, it’s up to you whether or not you should join MLM (adults already what…). Some people learn by words of wisdom, while some need to be knocked hard by life first, kan? In any case, DO take the necessary considerations and decide wisely before making the plunge.

Some of the things that you’ll need to consider if you don’t want to lose money:

That aside, if you ever spot an illegal MLM or scam, or maybe after reading this article, you realised the MLM you joined isn’t legit, don’t be shy to report it!