Gambling And Your Chances Of Making Money


Any choice that is taken based on the probability of an outcome of some future event is called a gamble. As such, the term also refers to actions that are not traditionally known to be gambles; actions like investing in properties, bonds, insurances etc. This article serves to analyse the parallels between gambling games and investments.

Mathematically speaking, odds are the probabilities of certain outcomes occurring. However, in gambling talk, odds refer to the ratio of a wager placed by a first party (usually the House or a bookie) to the wager placed by a second party (you).

In the match between France and Germany, the odds are 1:1 (there is an equal probability of winning between the two teams). In betting terms, this means that the bookie will pay RM 1 for every RM 1 bet on Germany (and likewise for France). This means that if you were to place a RM 1 bet on Germany and fortunately, Germany wins, you will receive RM 2 (profit + initial stake).

It is important to remember that in gambling, odds quoted by bookies always refer to wager ratios rather than the true probabilities of an event. The reason to which will be explained below. The following table summarizes the types of odds and what they represent in terms of probabilities: 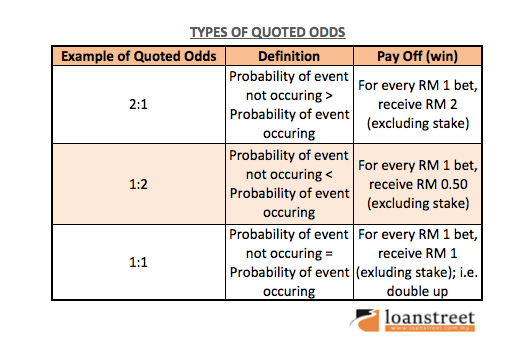 Now, let us look at a simple casino game called Roulette to get an idea of how to calculate your odds in a typical game. There are many styles of Roulette, however, we’ll be referring to the single zero Roulette played in Casino de Genting. Below are the probabilities of winning according to bet positions:

Since there are 37 numbers, there are 37 possible outcomes. Hence, the probability of any single number winning is 1/37 or 2.70%.

The House pays only RM 35 (plus initial stake of RM1) to every RM 1 bet.
Because the payoff is 35:1, which is different from the true probabilities of winning, which is 37:1, you can expect a negative return from a statistical point of view.

(This is known as the House Edge which we will touch on more later.)

Here, you are essentially betting on two numbers instead of 1. This increases the probability of winning to 36/37 or 5.41%.
However since the payoff is 17:1, your expected return per bet still falls under the negative.

The methods to calculating the above bet positions are the same as for Single Numbers and Splits.

The following table summarizes the probabilities of winning associated to each bet position, and the pay off:

The House Edge is the casino’s expected return or profit procured, on average, from all bets placed in a particular game. From the previous example, we showed you that your expected return from all bets placed is -2.70% (~ -0.03). This means that, on average, for every RM 1 bet placed, you lose RM 0.03. That statistical RM0.03 lost translates to the casino’s profit giving them the ‘edge’ for every bet placed.

But that doesn’t seem like much, especially after considering the fact that people do win bets. So how do casinos sustain these pay outs and still manage to profit?

Let’s now assume that, on average, 2,000 people visit Casino de Genting every day to bet at the Roulette tables. We also assume that the average bet placed is RM 50 per person and that each person plays at least 3 rounds before moving on. Hence, for that single day, the House can expect to earn a return of around:

Of course, this doesn’t mean that the House will definitely bank in RM 8,100 from the Roulette table. There is always the possibility of earning a lower return or even a higher return for the day. This is called the variance of an event (i.e. how many outcomes can an event have and how much do these events differ from one another). As such, it is just an estimate of the Casino’s daily earnings from the Roulette tables drawn from mathematical probabilities.

Should I Gamble My Money or Invest Them

Games that involve gambling long have been the centre of statistical study. What’s fascinating is that the very same statistical concepts that are used in gambling are also applied in Finance. Actuaries use probabilistic concepts to predict stock values, set insurance premiums and etc.

The example below illustrates the use of probabilities in calculating the expected return of Stock A under any state of economy.

Note: In the table above, probability refers to the probability that the condition of the economy would be booming, normal or in a recession, some time in the future.

This means that, over the long run, an investor can expected a 39.5% return to his initial investment.

With adequate financial knowledge about hedging and the current markets, one may tailor his portfolio to have a low variance and high positive expected returns which makes it less of a gamble and more of an educated risk.

Gambling and investments both require predicting the outcome of future events and as such, there is a certain degree of variance in the resulting outcomes. However, there are differences between the two. 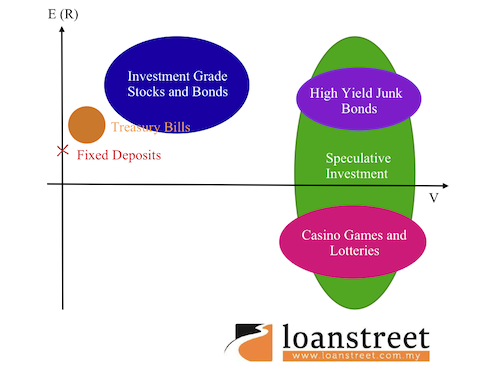 Professional gamblers and talented mathematicians have taken up the challenge to create algorithms that can “beat the system”. We’ve heard of card counters who make money at blackjack and statisticians who’ve cracked lottery number systems.

These people are not gamblers. They are investors.

So to those of us, who aren’t as proficient in mathematics and statistics, we stand a better chance at making money by placing our “bets” on profitable investments than on gambling.