Will Your Loved Ones Inherit Your Estate?


A will is often a forethought tucked away only to resurface when the time is ‘right’. This is evidenced in the fact that only about 2% of the Malaysian population has written a will. While majority of the public has overlooked the importance of having a will, a staggering RM42 billion worth of assets has been frozen as of 2011.

The big question remains: Is a will writing really necessary? Lets walk through some common questions and the repercussions.

Benefits of Having a Will and The Consequences Without One

The table below summarises the advantages of writing a will and the consequences of leaving your family behind without it. 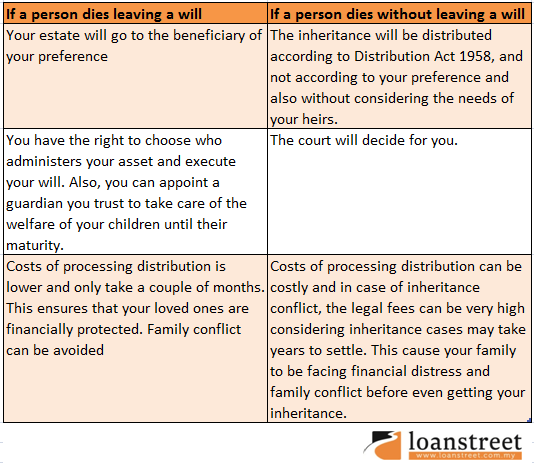 Often times, the dispute of wealth division left behind by the deceased causes a family uproar. Having a will can prevent any future conflicts between family in an event of death.

Who Needs to Write/Rewrite a Will?

Below are some signs on when you should write/rewrite your will:

Islamic Will or Wasiat For Muslims, the will has to be written in accordance to Islamic law. An Islamic will is known as Wasiat. It is crucial to have a Wasiat because without it, the estate will be distributed according to Faraid, in which any adopted or step child will not be entitled to any estate.

There is probably no two ways about the importance of a will. After all, it is in the best interest for your loved ones that estate division be distributed according to personal preference.

More importantly, you wouldn’t want your estates to go unclaimed only to have the ownership be taken over by the government.

Bear in mind that the clauses are written perfectly, because an invalid or challenged will be equivalent to having no will.

RELATED ARTICLES:
Malaysia vs. Singapore: How expensive Is It to Die?
What Happens to Your Debts When You die?