What Is a Macau Scam and Why Are You in Danger?


Let’s face it: we live in an age where technology is constantly changing around us. Just look at the number of smartphones and mobile devices that are being released every month — all with new, technological advancements of their own.

Unfortunately, this change isn’t limited to just good things. Financial crimes are always being reinvented too, which is why we tend to hear about new financial scams regularly, with one of the more popular and fresher entries in Malaysia being Macau Scams.

Now, before you brush them aside for being ‘just-another-scam’ (and start daydreaming about Macau’s delicious Portuguese egg tarts!), consider this: in just 2020 alone, a Malaysian bank manager and a doctor in Penang lost RM1.97million(mn) and over RM20,000 respectively to Macau Scams.

How is this happening, and why are you in danger of possibly experiencing the same losses?

What is a Macau Scam? Here’s a frightening revelation: the basic mechanism of a Macau Scam is a rather simple process that many of us may be more familiar with than we realise.

Ever received a call from someone claiming to be from a Malaysian court or Polis Diraja Malaysia (PDRM), saying that you’re in some form of legal trouble? You might have been in the early stages of a Macau Scam.

These persuasive scammers may also disguise themselves as bank officials who are calling to inform you that you’ve been linked with credit card payment problems — and in more drastic cases, some might even falsely claim that someone you know has been kidnapped.

Once these calls — which are made to look like they come from local numbers using Voice Over Internet Protocol (VoIP) — are made and a victim has been convinced that he or she is involved in a problematic situation, the stealing begins by getting the victim in question to transfer money to the scammers. 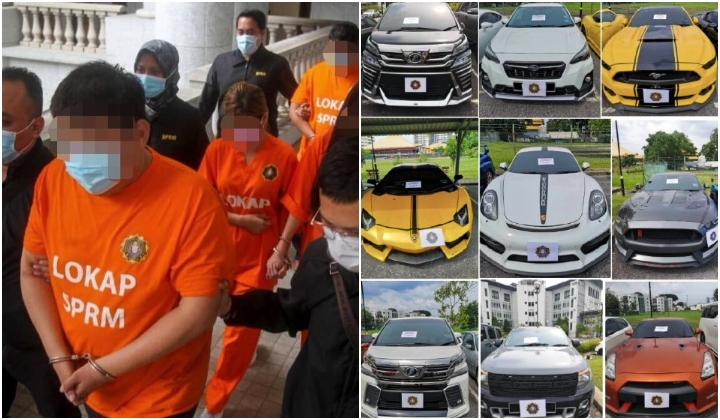 The amounts of money that are stolen by such scams are not small either. Aside from the two examples given in the opening of this article, the Malaysian Anti-Corruption Commission (MACC) recently seized 730 bank accounts that are believed to be linked to a Macau Scam syndicate. The total amount of money contained in these accounts? RM80mn, along with RM5mn in cash and 28 luxury cars.


Why am I in danger? 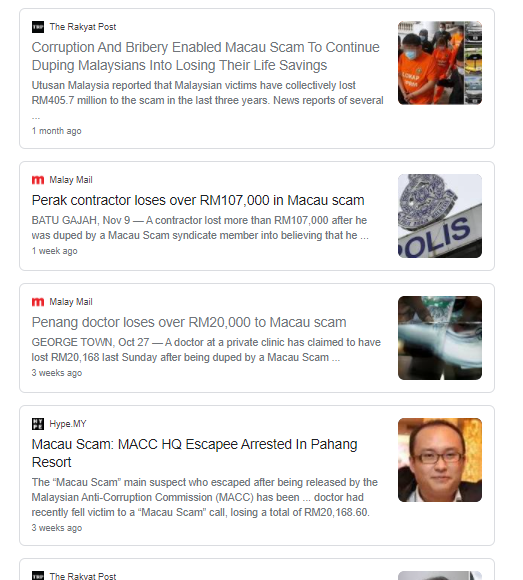 It is difficult to say if there is a specific group of people that Macau Scammers tend to target more than others. As illustrated by the aforementioned examples, victims can range from bank managers and doctors to housewives.

This simply means that Macau Scammers have no qualms about targeting anyone and everyone, as long as they can take advantage of your fears and sell you their false stories, accusations and identities.

After all, if the authorities call you and inform you that you’re under suspicion of breaking the law or that someone you care about deeply is in danger, wouldn’t you be instantly swimming in a pool of fear and concern?

The fact that these scammers use VoIP-generated numbers which resemble — or even completely copy — the numbers of the authorities or parties that they are claiming to only make them more believable too.

How to deal with a Macau Scam?

Here at Loanstreet, we’re all for helping you to obtain the skills and knowledge you need to protect yourself and your finances daily. This is why we’ve developed a guide below for dealing with Macau Scams.

The best part? We’re calling it our very own MACAU guide to make it easier for you to remember!

(M)ute up: If you think a caller is suspicious, or if your caller is constantly pressuring you to disclose personal information, go mute. Remember that if you are in trouble legally, the authorities will not come after you through a simple phone call — and if it’s your bank that’s calling, you will not be asked to disclose any information over the phone.

(A)sk away: If the call that you receive is an actual official one, the caller will have no problems answering any questions. This is especially true for questions regarding their identity, so feel free to ask for names, numbers, positions, and addresses. 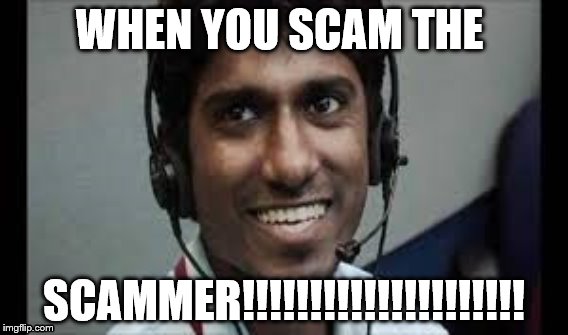 (C)all them: You have every right to end a call that you find suspicious, even if the caller insists that doing so is bad for you or your situation. End the call, then proceed to call the bank or authority that the caller claimed to be from to check if the call was real.

(A)ccuse them: Believe it or not, calling a scammer out on his or her lies can sometimes be a good defence. Scammers will often end the call immediately once you accuse them of being fake — and in some cases, a syndicate may avoid calling you again in future once you’ve caught them a few times.

(U)nfriendly time: Yes, as Malaysians, we can’t help but be friendly. After all, the “Rileklah bro!” spirit is embedded in us! However, if you find a call to be suspicious, there is no reason for you to maintain a friendly or warm attitude. Doing so can sometimes be used against you, as scammers may feel encouraged to be extra persuasive towards friendlier victims. Instead, end the call promptly, even if it means being cold.


There you go! 5 ways for you to deal with a Macau Scam from the moment you receive a suspicious call. Above all else, keep in mind that you have everything you need to defeat scammers — and that no one can scam you unless you give them a chance to do so, directly or indirectly.

And no, fret not. This article isn’t a scam either, although you should also be prepared to deal with scammers who might claim to be from Loanstreet in future!
Continue reading...