WITH the public complaining over soaring chicken prices, a former Parti Pribumi Bersatu Malaysia (Bersatu) leader said that ministers were clueless on how to deal with the problem.

“The problem lies with our failed food security policies. We place too much emphasis on the palm oil and rubber sectors. We only talk about the importance of food security but in reality, all our agriculture ministers of the past failed,” A Kadir Jasin said, in a Facebook post.

According to Bernama, the Domestic Trade and Consumer Affairs Ministry (KPDNHEP) Price Alert reported that price of standard chicken at the national level has increased from RM8.39 per kg to RM8.46 per kg, an increase of 0.94% or eight sen per kg.

Based on KPDNHEP’s monitoring in the Peninsula, there are 19 premises that sell chicken at prices exceeding RM10 per kg.

Meanwhile, Finance Minister, Tengku Datuk Seri Zafrul Abdul Aziz said the Government was aware of the resulting price increase in chicken meat and would seek a way to stabilise pricing. 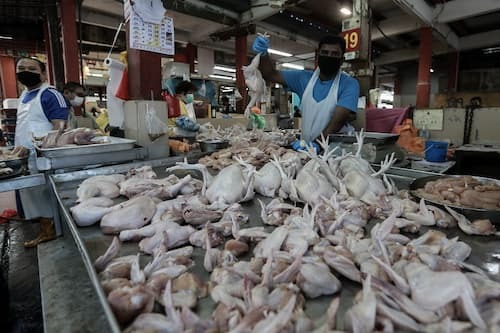 Touching on the matter, Kadir accused Tengku Zafrul of being ignorant on the matter just like Kiandee, for refusing to acknowledge that the weakening ringgit was also causing the problem.

“As our chickens consume imported feed, the latter’s price will fluctuate depending on the import cost and currency exchange.

“And I have not even touched on labour cost, medicine, transport and profiteering by traders. So, it’s actually a complex matter but I don’t think our ministers understand this,” he stated.

Offering solutions, Kadir urged the Government to take stock of the situation and start transforming the nation’s agriculture sector, in order to reduce food imports.

For starters, the veteran newsman said that the Government could use under-utilised land in the country to plant food for livestock and poultry.

“For example, we can consider reducing paddy plantation to embark on corn plantation but I guess our ministers are too lazy to think about all this,” Kadir concluded.