7 China-linked Mega Projects That Mahathir Might Not Be Approving!


“We have to pay for the stupidity of Najib… very stupid… detrimental to our interest,” said Mahathir, at the end of his five-day official visit to China. Strong words, indeed.

If you missed out on all the drama and commotion surrounding the East Coast Railway Link and the Trans-Sabah Gas Pipeline (among many other China-linked projects) – let us fill you in. With Mahathir and Najib taking turns to criticise each other, and China caught in the middle, it’d be hard to miss out on the extensive coverage in all news channels.

So here’s a quick recap!

In one corner, we have former Prime Minister Datuk Seri Najib Razak, who was accused of entering into many lopsided contracts with China – evidence of him "selling" Malaysia to China. What this means is that, unlike a payment system based on work done, Malaysia has been paying based on a fixed schedule regardless of the construction progress. According to news reports, one such example is the now-infamous ECRL.

“We have found that the work done was only 13% but we already paid 39%. What do we get from the extra money that had been spent?” said Mahathir, who also added that the projects did not benefit the country but burdened the present government with additional huge debt.

In the other corner, we have Prime Minister Tun Dr Mahathir Mohamad, who was accused of wanting to scrap that aforementioned mega railway project – out of spite. And that the whole situation about the project’s cancellation was made worse due to the propaganda surrounding it.

“The people deserve to know if the decision to cancel the projects was based on reasonable and solid grounds, and not made out of anger towards the past Barisan Nasional (BN) government or China, which has refused to bow to Pakatan Harapan's demands," Najib was quoted as saying in a Facebook posting.

Should China be worried now that Mahathir has plans to scrap all unnecessary expenses?

Regardless of what each party’s ulterior motives may be, we come to the crux of the concern (both locally and internationally): what are the other China-linked projects in Malaysia that may be facing the same fate? Here are just some of the big bad boys: 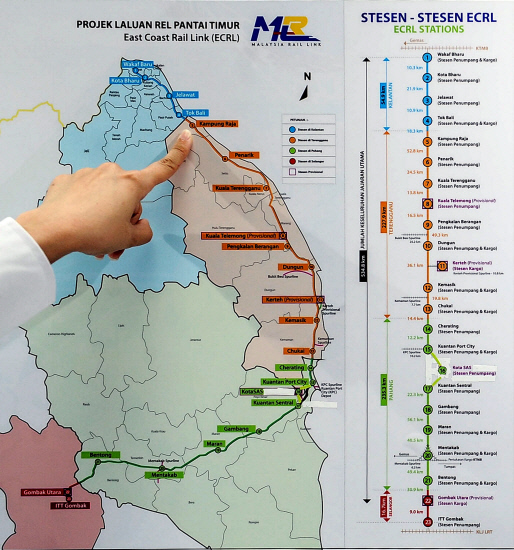 A 688km line linking Port Klang and Kota Bharu, this is the project that managed to cook up the storm that brought everything else into public scrutiny. Slated for completion in 2022, it’ll be able to cut down travel time between the east and west coast to merely four hours.

The cost of it varies, depending on who you’re asking. According to Mahathir, it’s a project that was initially estimated to only cost RM30bil but is actually RM81bil after taking into account other costs. According to Najib, that figure is grossly overinflated, and it remains at RM55bil. 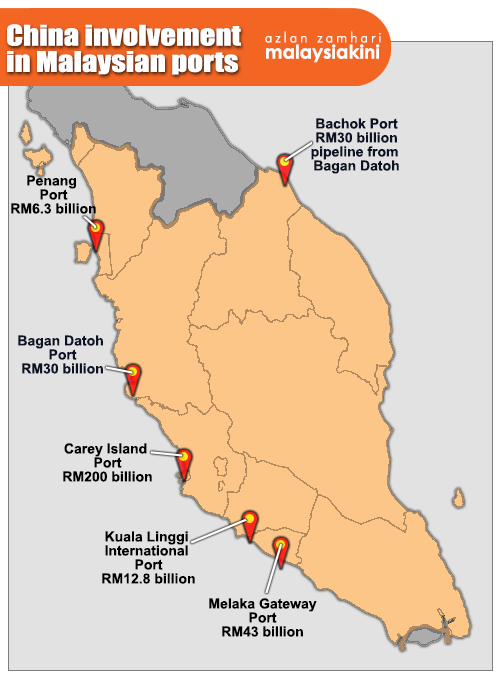 At an estimated cost of RM30bil, this energy port in Perak involves the development of an oil pipeline that would cut across Peninsular Malaysia and reach Bachok, a coastal town in Kelantan. It’ll be build in line with the 233km-long West Coast Expressway (WCE), a RM5bil project that’s slated for completion in 2019, and will create the most comprehensive port network along the the Straits of Melaka.

A trading port and mixed development with an estimated cost of RM43bil, it’ll involve the reclamation of three islands plus one natural island. It aims to be the largest private marina in Southeast Asia by 2025, and according to the chief executive officer and founder of Melaka Gateway Datuk Michelle Ong, “The project is anticipated to generate RM1.2tril for the local economy once it’s fully completed.”

Yet another Malaccan port (is there a pattern emerging here...) that’s aiming to be a harbour which manages huge oil tankers. It’ll offer 1.5mil cubic metres of oil storage capacity, refuelling services as well as dry docks for inspections and repairs. The construction will span over 10 years and has an estimated price tag of RM12.5bil.

Who’s the biggest port of them all? Carey Island – a port that will include an industrial park, free trade zone, commercial and residential areas! This Selangor project has various China state-linked corporations investing more than RM200bil to develop an entire island (approximately 10,000 hectares of land in total). To be completed in 20 years, it’s expected to handle 30mil twenty-foot equivalent units (TEUs) container ships annually. One of the projects that was nearly scrapped but is now under “postponed” status, it has an estimated price tag of between RM60bil and RM70bil. Aimed at linking Kuala Lumpur and SIngapore, the 350km railway was expected to shorten the travel time between both countries to only 90 minutes.

One possible alternative which the Malaysian government was considering: upgrade the existing railway infrastructure between both countries, which will cost an estimated RM20bil instead, and prevent a RM500mil fine as compensation.

Actually, the biggest China-linked project is Forest City in Johor, but it’s not a port or a railway, it’s a massive 20 sq km development that rests on four artificial islands. It has a whopping estimated price tag of RM410bil and will include residential units, an American international school as well as a golf course.

This project may have been given the green light to continue, but a recent comment by Mahathir has given an air of caution to the entire development: "One thing is certain, that city that is going to be built cannot be sold to foreigners. We are not going to give visas for people to come and live here. Our objection is because it was built for foreigners, not built for Malaysians. Most Malaysians are unable to buy those flats,” he said.

The problem is: mainland Chinese nationals account for about 70% of apartment buyers! How la now?

Are we building too soon when the economy hasn't caught up yet?

Does anyone remember the USD140bil (roughly RM577.4bil) Yan Petroleum Industrial Zone? No? That’s because it was yet another futile (China-linked) mega project that was deemed “not feasible”. With so many ports and railways mushrooming up one after another, there’s always a risk of a mismatch in supply and demand. There’s no solid guarantee that Malaysia will even see the promised volume of trade to not only cover these costs, but generate trillions of Ringgit in revenue.

At the heart of it all, a new report has emerged – one about Malaysia wanting to help China “save face” (jaga air muka). You see, there’ve been increasing criticism about the Chinese government cooking up projects around the world under its ‘Belt and Road Initiative’ as part of a debt-trap type of diplomacy. And Najib seems to have fallen right into that trap.

Mahathir, in his efforts to reduce the high debt left by the previous government while simultaneously avoid stepping on China’s toes, might be taking the diplomatic road by pointing all fingers at Najib and appearing to vaguely flip-flop over the fate of major China-linked projects. “They know I am not anti-Chinese. They understand how we have to look after the interest of Malaysia because the projects are not viable,” said Mahathir.

Perhaps there’s a reason why he’s known as a ‘shrewd politician’ all along.