What Caused House Prices to Increase so Much Over the Years?


There is a wedge between house price and its overall development cost. As shown by Khazanah Research Institute (KRI) in its publication “Rethinking Housing: Between State, Market and Society”, house prices doubled from 2008 to 2016. How does this happen? We have looked into depth to answer all your most pressing questions.

1. What caused house prices to increase so much over the years? 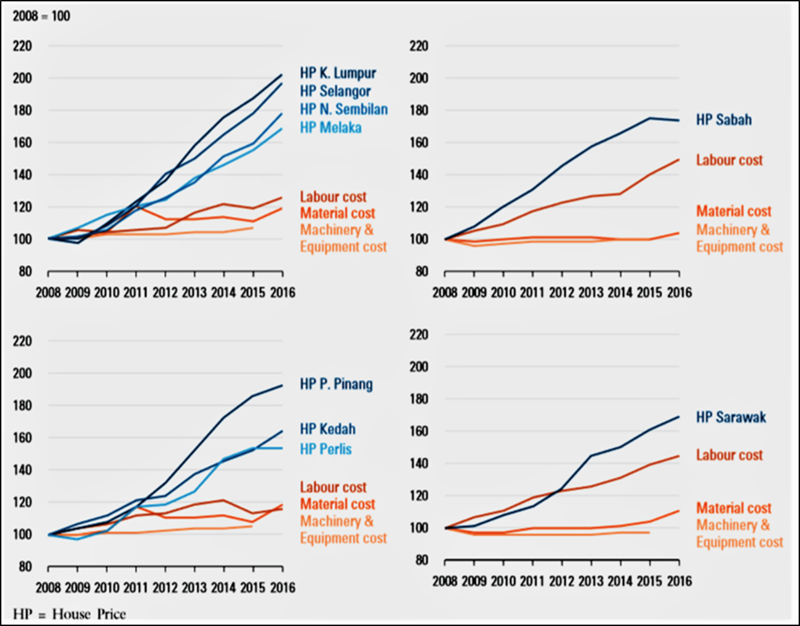 Based on Figure 1, we can see that costs for the elements of development such as labour, materials, machinery and equipment have increased only slightly in the same period. Such disproportionate increases have led to the conclusion that – the developer’s profit margin increase and the inefficiency of the country’s housing construction industry are directly responsible for the skyrocketing house prices. While this is inevitable, one should not overlook other elements of development cost, particularly the impact of land cost on house price. 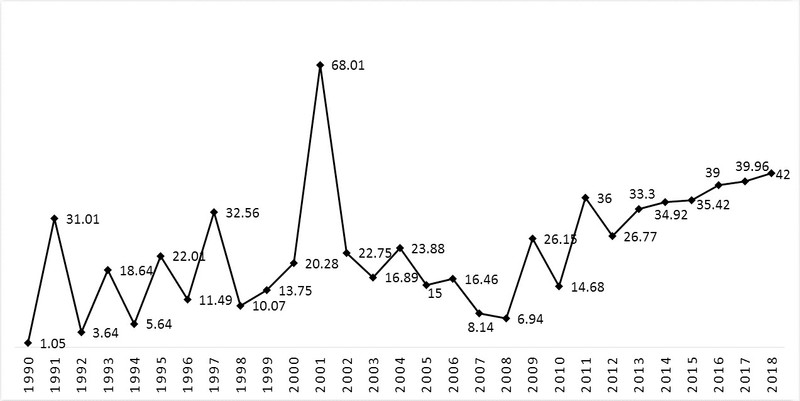 In Selangor, for example, land prices have increased over the last decades, although there have been fluctuations along the way. Figure 2 indicates how land prices in Selangor change in a passage of time, from RM1.05 per sq ft in 1990 to RM42 per sq ft in 2018 – based on previous land transaction records. When compared, the growth in land price – with a compound annual growth rate (CAGR) of 7.8% – has outstripped the growth in house price, material cost, labour cost, and machine & equipment cost; with a CAGR of 7.4%; 1.9%, 2.2%, and 0.6%, respectively (Figure 3). One can also observe that land and house prices tend to move in sync. In this sense, the land price can be considered as a significant contributor to the house price.

2. Why has land prices in second- and third-tier cities increased significantly?

Apart from value appreciation through time, land price increases widely depending on a range of factors such as land use, local planning regulations, proximity to main centres, whether it is serviced or has the underlying infrastructure, and so on. Locations within markets with higher population growths, better economies, and more developed infrastructures are in higher demand; while a remote parcel of land may have limited value as it does not have access to amenities, utilities, transportation or other resources that could make the property useful. 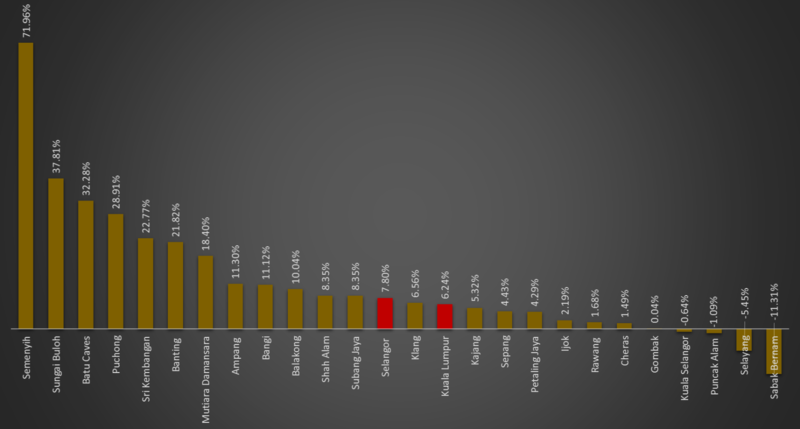 Between 2012 and 2018, land prices at different locations in Kuala Lumpur and Selangor have been changing at different rates (Figure 4). In Semenyih, for example, land prices increased with a CAGR of 71.96%, followed by Sungai Buloh (37.81%), Batu Caves (32.28%), Puchong (28.91%) and Seri Kembangan (22.77%). The similarity between these locations is that they are considered as second or third-tier cities from the Kuala Lumpur city centre, but with significant demographic changes over time, coupled with the increase in economic activities, the economic values of land in these areas have increased. 3. How does land cost affect the development of affordable housing like Rumah Selangorku? 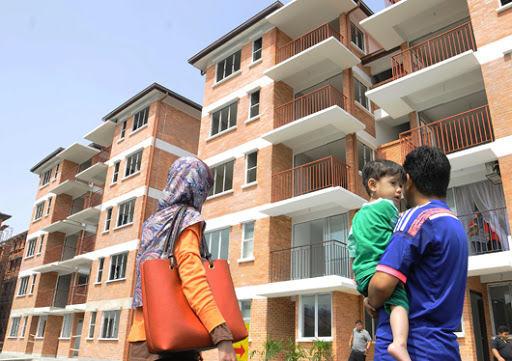 As one can observe, the data on land prices reflects the density gradients of the Klang Valley region. The closer the area is to the central business district (Kuala Lumpur), the higher its population density; the higher the respective land prices and housing development costs are going to be (Figure 6). This, to some extent, explains why most houses under the affordable housing scheme are located at the outskirt areas that are not in favour of the homebuyers, due mainly to the unmet demand on lifestyle and living environment. 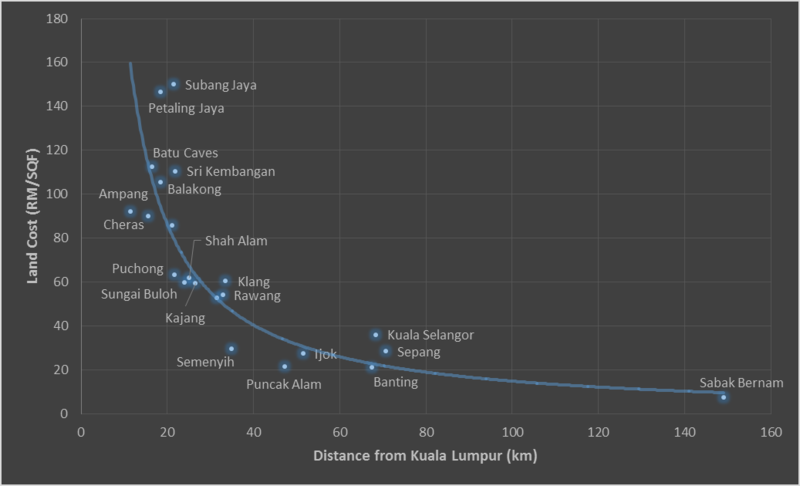 In free-market housing development where the unit selling price is subject to the market forces, land cost is residually determined by house prices, construction costs, and developer’s profit. Developers would not mind bidding a higher land price if there is speculative room for the GDV to increase (a profit margin with 15% of GDV is the threshold for developers). However, in affordable housing developments where the unit selling price is fixed, land cost becomes very significant and has to be controlled to safeguard the developer’s profit margin.

This is especially true for the Rumah Selangorku (RSKU) housing development as the set specifications – house size, development density, community facilities, parking requirements – tend to limit the value of the land to be fully optimised. Any increases in land cost will be sure to cause a reduction to the developer’s profit margin; and hence, affecting the project viability. As such, developers need to leverage on cheaper land cost when building affordable houses, to meet the capped selling price.

4. Why is 15% GDV so important to developers when it comes to building affordable housing? 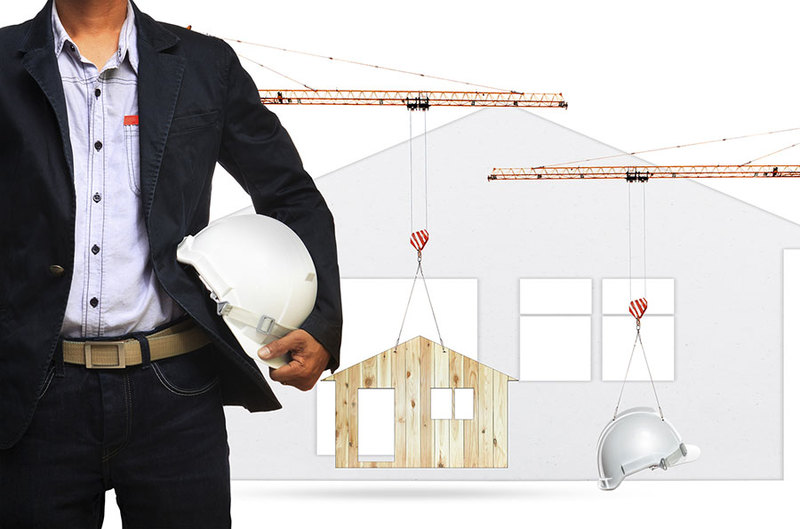 This percentage denotes the return on investment from the project – which spans more than 5 years until the expiry of the defect liability period and final closing of projects accounts. Since housing development is high risk and high capital investment with a long gestation period, a profit margin that is below 15% will render the venture not feasible. Therefore, land cost plays a huge determining factor for the developers.

The impact of land cost can be explored by studying the breakeven development cost and profit margins of building RSKU Type D houses. Assuming 600 units of 900sf Type D RSKU houses with the unit selling price of RM200k are to be constructed on a 5-acre parcel of land with varying development densities (Figure 7). 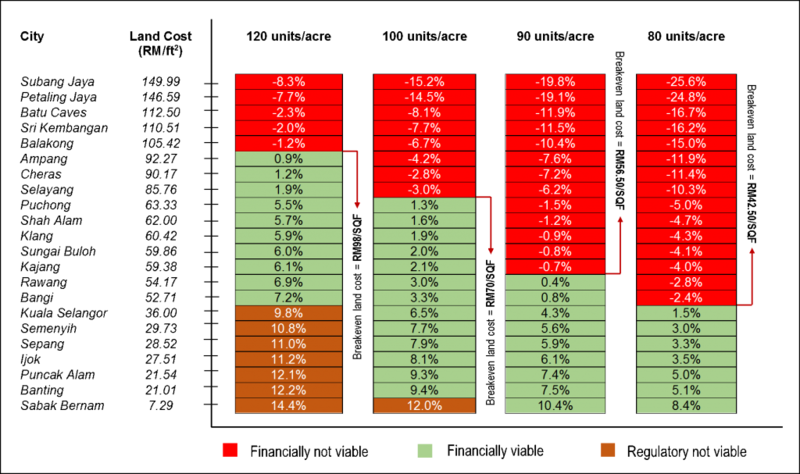 When the allowable density is 120 units/acre, the maximum land cost for the breakeven scenario (where the development cost equals to the capped selling price at RM200k) is RM98 per sq ft. The project becomes financially not viable if it is located in Subang Jaya, Petaling Jaya, Batu Caves, Seri Kembangan, as well as in Balakong. The project is also not viable in areas like Kuala Selangor, Semenyih, Sepang, Ijok, Puncak Alam, Banting, and Sabak Bernam – although the profit margin is higher – because the maximum allowable density in these areas is 100 units/acre based on the RSKU requirements.

Only when the allowable density becomes 90 units/acre or even 80 units/acre, it would be considered financially viable in third-tier cities as land cost in these areas are below RM42.5 per sq ft. As such, the building of RSKU Type D houses is unlikely to be undertaken by developers.

To note, cities under the governance of MBPJ, MBSJ, and MBAJ are allowed to build RSKU Type E with the capped selling price of RM250k. However, a reasonable profit margin with 15% of GDV can hardly be achieved because there are fewer chances to obtain land with price below RM95 sq ft in these areas. For example, in Figure 8 above, one can observe that only projects that are located in Ampang, Cheras, and Puchong are considered as viable (with profit margin > 15%) from the developer’s point of view.

5. Why are there so few choices in the affordable housing sector?

Due to local planning requirements and traffic conditions, not every location is allowed to build at a density of 120 units per acre. In this sense, the reduction of allowable density can have an impact on the profit margins; thereby limiting the selection of suitable locations for the construction of RSKU Type E houses. For example, if the allowable density is reduced to 100 units/acre, a reasonable profit margin can no longer be achieved in areas like Ampang and Cheras, as land prices in these areas are higher than RM68 per sq ft. This project’s viability would very much depend on having a land price that’s below RM95 per sq ft and an allowable density of 120 units/acre.

Based on the above, it is proven that the margins for building RSKU Type D are near to non-existent; not to mention the building of RSKU Type A (RM42k), Type B (RM100k), and Type C (RM150k) houses, which have lower capped selling prices.

The policymakers should realise the fact that project viability is the key to project completion, inclusivity, and sustainability. Rather than passing on the responsibility of building affordable housing to the private sector through mandatory requirements, the state government should also be involved in affordable housing development as well – in the form of providing incentives – to enhance the efficiency of RSKU development.

Among the incentives that can be undertaken by the state government are:

This article was repurposed from "How much have land prices increased in KL & Selangor and what is the impact on affordable housing?", first published on iProperty.com.my .