How Much Does It Cost To Watch A Premier League Match In The UK?


Even as patriotic individuals, many Malaysians still support foreign football clubs, namely UK teams. In fact, English football has come to recognise their, global fans, including Malaysians, who primarily support Manchester United, Chelsea, Arsenal and Liverpool. Regrettably, these four teams also sell some of the most expensive game tickets.this, in addition to a weaker local currency against the British Pound, makes it rather costly for Malaysians to watch their favourite team in person.

How Tickets Are Priced

Fans may find that certain admissions cost more than others and there are several reasons for this. First off, top-draw matches will on average cost more, approximately two or three times than that of a normal ticket. For example, admission to a Manchester United vs Liverpool match can fare up to £200 (RM1, 085), even £300 (RM1, 630) per ticket.

Secondly, similar to ticketing practices for most sporting and entertainment events, the seating zone will factor into price.

Also, most clubs provide discounts based on membership status and the age of the ticket holder, thus non-member adults will often pay the most for tickets. 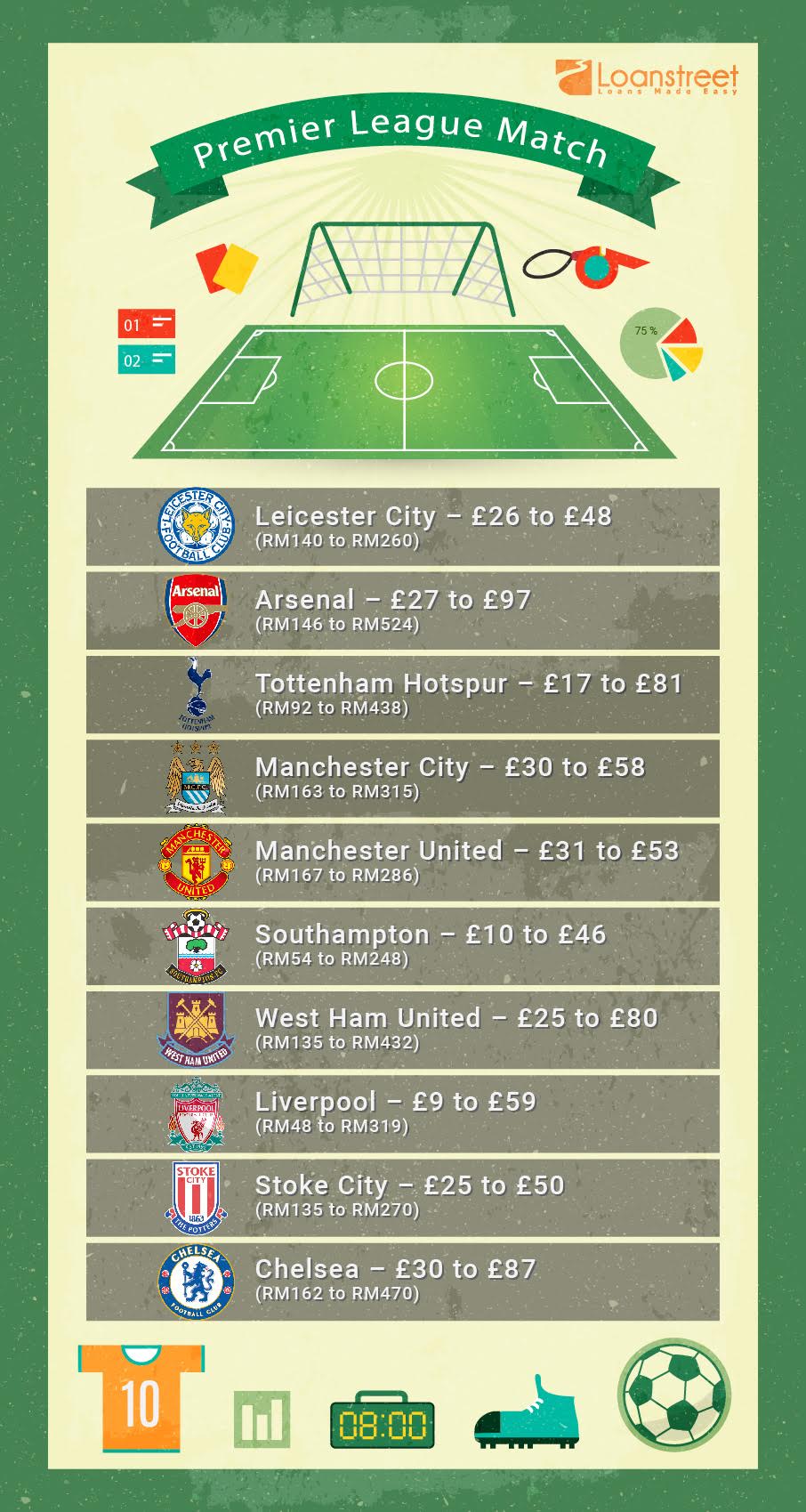 Note that even though some of these prices appear affordable, it is rather difficult for foreign fans to obtain the inexpensive tickets.  This is because they often sell out to those with memberships first, making cheaper tickets harder to come by for non-members and foreign buyers.

Moreover, sale to the general public are limited and the tickets offered are usually for higher-priced seating.  But buying season membership at £30 to £50 (RM160 to RM270) might not be worth the cost for foreign fans that are typically only looking to buy a ticket for one match.

Thus for international supporters, the best option would be to purchase a ‘hospitality package’ offered by most top clubs which include  a guaranteed match ticket plus accommodation and depending on the bundle, could also include refreshments, tours and souvenirs. Packages start from £100 (RM543) and it can be purchased from the official partner or directly from clubs.

Accounting for Other Expenses

Apart from match tickets, travelling fans will also need to spend money on flight tickets and, unless having the option of living with a friend or relative for free, accommodation.

Now if flights are booked early and are competitively compared, the cheapest possible transit fare may start from RM3, 000 (return ticket from Kuala Lumpur to London).  Still, this depends on a number of variables and might be subject to multiple stops and longer transit time.

Accommodation costs can be inexpensive as travellers have various lodging options such as hotels, hostels and even ‘social’ stay services like Airbnb costing as little £17 (RM93) a night. Moreover, if choosing a hospitality package as mentioned above, at least one night’s stay at a hotel is covered.

Depending on location, travelling fans might require transportation to and from match grounds where the most economical options would be public transport and social rides. If choosing to rent a car, note that stadium or nearby parking costs will average £5 to £10 (RM27 to RM54).

Here is an estimate of how much your trip could cost in total:

** Actual costs may differ based on choice of match, destination and exchange rate.

How to Save More on Your Trip

Even though match tickets and travel costs can be quite heavy, there are a couple of ways to reduce overall expenses. Here are three tips to make a football holiday more affordable:

While you essentially can watch certain Premier League matches in the UK for around RM5 000 - you would be paying for a fairly basic trip. Plus, it would also take meticulous planning to find the lowest prices for each category of expense and even then, you may (realistically) still spend more.  Nevertheless, to die-hard fans, the extra effort is completely worth the experience of a lifetime.