During Mahathir's Previous Era, 4 Central Bank Governors Have Resigned. Why?


The resignation of Bank Negara Malaysia (BNM) governor, Muhammad Ibrahim comes as a shock to many, especially when he still has two years before the end of his term. That's like flipping the chess board upon an impending checkmate.

Prior to the announcement, The Malaysian Insight reported that Daim Zainuddin had strongly suggested BNM's involvement with a land purchase to pay off some 1MDB debts.

"The land deal is a good example of why the independence of BNM, its government process and the appointed stewards of critical institutions are absolutely paramount for the current administration," said Daim. His words seem to carry a lot of weight as he is deemed Mahathir's right-hand man, the one who's asked by Mahathir to "find solutions for this or that".

Sounds familiar? Pic of "The Wolf" from BAMF Style, and Daim Zainuddin from Utusan Online.

Both BNM and the Finance Ministry have refused to comment so far, and Muhammad has yet to respond to several calls and text messages to his mobile phone and office.

However, this is not the first time a BNM governor has resigned prematurely, but the fifth! To say that the position as cursed as Defense Against The Dark Arts teachers in the Harry Potter series is incorrect. Ismail Mohammed Ali (second governor) has held the position for 18 years, while Zeti Aziz (seventh governor) has held it for six years, before both went for retirement.

So what happened? Let's take a look at each governor, starting from... Aziz Taha was the third BNM governor. He held the position from July 1980 to June 1985, a turbulent period of the nation considering millennials have came into existence. Aziz Taha started in BNM as an assistant manager and rose his way up to the top rank. Some of these notes are worth five figures now. Image from Blogspot.

He is also the father-in-law of CIMB Group's Chairman, Nazir Razak, who seems to hold him in high regards:

"The other person who has left an impression would be my father-in-law, Tan Sri Abdul Aziz Taha, who famously resigned as the governor of the central bank on principle." – Nazir Razak, quoted by The Star Online.

So, why did Aziz Taha quit? Most of the sources we found only cited that he had a "disagreement with Mahathir over lending policies", without any elaboration. KiniBiz also reported that it was due to his long-standing dispute with the then finance minister, Daim Zainuddin.

According to a column in Harakahdaily, Aziz Taha had long fought for the independence of BNM from government's meddling. The article also implied that Aziz Taha might have resigned because he didn't want to be involved in any kind of currency speculation.

Yet there was a governor who involved himself in currency speculation, which brings us to... 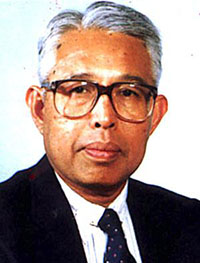 Jaffar Hussein was the next governor in line, serving from June 1985 to May 1994. Coming from humble beginnings, Jaffar worked his way up and became a partner at Price Waterhouse, then the CEO of Maybank, and eventually took the helm at BNM. He went on record saying that he took a huge pay cut to take up the central bank job "as a national service". In case anyone's wondering, Jaffar is NOT the son of our third Prime Minister, Hussein Onn.
He is, however, the father-in-law of Nur Jazlan Mohamed, the previous Deputy Home Minister.

According to Utusan Online, Jaffar was one of the earliest to promote the implementation of Islamic Banking. He also transferred the supervision of the insurance industry from the Finance Ministry to Bank Negara in May 1988.

Jaffar stepped down to take responsibility for the infamous forex scandal of the 90s, where RM15 to RM30bil were lost in currency speculation. Jaffar stated that he did so to "defend the Ringgit". Now, the whole forex scandal is a long and complex story involving powerful people including Mahathir, Anwar Ibrahim, Daim Zainuddin, and even tycoons of the global economy such as Alan Greenspan and George Soros. You can read about the whole saga on CILISOS.

Mahathir, however, did acknowledge Jaffar's many contributions during his tenure as the governor:

“All the forex losses suffered by BNM between 1992 and 1994 cannot tarnish the good deeds and contributions made by Jaffar, who had served tirelessly in the interests of the country.” - Mahathir, quoted by The Star Online.

Thankfully, the practice of BNM being involved in currency speculation was stopped by his successor... Just like the governors before him, Ahmad Don's resume is so impressive that it will make even Tony Fernandes feel like an under-achiever. He made his name in the top positions in various financial institutions including Maybank, JP Morgan, and Alliance Bank. Ahmad became the BNM governor from May 1994 to August 1998.

As mentioned before, Ahmad Don put forex trading in BNM to an end. According to The Star Online, he also initiated the formulation of the central bank’s mission, aspiration and shared value – all then incorporated in a document known as the Strategic Plan 1995-2000.

A position as the governor during those years wasn't the most glamorous profession, as it was at the height of the Asian Financial Crisis itself. To tackle it, Ahmad favored a tight monetary policy, an opinion that was strongly echoed by then finance minister, Anwar Ibrahim.

Mahathir, on the other hand, wanted an expansionary approach. He and Daim Zainuddin formed an economic council without the finance minister or the BNM governor, and continued to impose capital controls, pegged the Ringgit to the US dollar and slashed lending rates. ♪♫ Do you remember the day... ♬ when our hair weren't so grey... Photo from YouTube.

The disagreement on how to handle the crisis became so tense that Anwar was sacked, while Ahmad Don and his deputy Fong Weng Phak resigned from BNM "as a matter of principle". That also marked the first time in national history where both the BNM governor and deputy tendered their resignations together. 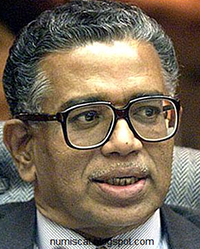 Abul Hassan spent his entire career in government service, where he became the director general of the Economic Planning Unit in the Prime Minister’s Department. He served as a BNM governor from September 1998 to April 2000, the shortest tenure compared to the rest.

Kinibiz Online described his term as "relatively unevenftul". It is also unclear on why he resigned or why his term was not renewed, other than some market talk saying that Abul Hassan's relationship with then finance minister Daim Zainuddin wasn't particularly good. However, he was appointed as a special economic adviser to Mahathir just days shy after Daim announced he was going to take a break.

The independence of BNM has to be upheld

It is worth noting that all of these governors resigned during Mahathir's administration, who had Daim Zainuddin as his trustworthy advisor. It is also worth noting that in a lot of those cases, there seemed to be some form of resistance between BNM and the government.

To look at the glass half-full, one can say that the governors seem uncompromising in their principles, providing a good check-and-balance to the government and Ministry of Finance.

In fact, one of the most important things a BNM governor has done actually came from Zeti Aziz when the Central Bank of Malaysia Act 2009 was passed in parliament. This act further cemented BNM's independence from the government, and it especially came in handy during the scandals and investigations that happened under Najib's administration. 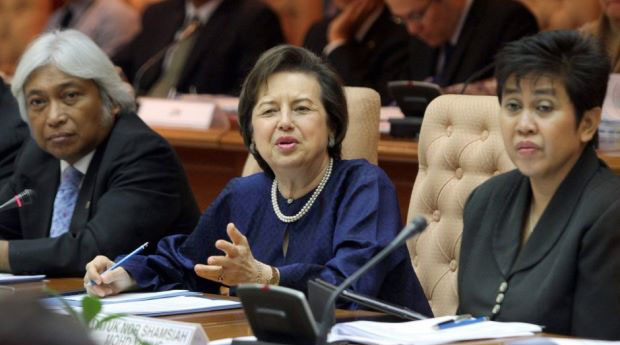 (From left) Muhammad Ibrahim, Zeti Aziz, and the likely candidate for the next governor, Shamsiah Yunus.

As for the appointment of the new governor, it has been strongly hinted that one of Zeti's previous deputies, Shamsiah Yunus, might take over. Yet, regardless of the choice, we hope that BNM will continue to maintain their integrity and independence. In the words of Zeti herself:

“Every country needs an organisation like the central bank that does not have any political agenda. It should remain focused on ensuring macroeconomic, financial and economic stability.”  – Zeti Aziz, quoted by The Star Online.