How Will 'Carmageddon' Affect the E-Hailing Industry? And, the Cost of Becoming a Grab/Mycar Driver


E-hailing industry has dramatically changed the personal transportation industry and the concept of commuting in Malaysia. Yup, the force is so strong that taxis (not all) started to blame the e-hailing industry for sailang-ing their rice bowl.

In line with #MalaysiaBaru, the Ministry of Transport had introduced new regulations (which already existed and applied to the taxis) to legalise the e-hailing industry. This is to ensure equal opportunities for both taxis and e-hailing drivers. Ever since the registration and training process for PSV licence commenced on April 2019, there has been a lot of thumbs down from the e-hailing drivers and consumers.

Additionally, the new regulations were supposed to go into force 12 July 2019, but gomen had recently been given another three-month extension to obtain the public service vehicle (PSV) licence or the e-hailing vehicle permit (EVP).

Okay, so we can’t deny the fact that taxis drivers aren’t competing fairly with the e-hailing drivers. Taxi have to pay expensive rent (about RM40 daily because they’re tied to the leasing system) and go through PSV processes, while their competitors only need to bear the cost of petrol. So, member tak puas hati lah.

Now, the logic is, by having these new regulations, both parties will have a fair play within the market. Every driver has to go through the same process, obtain the same license and pay the same insurance - problem solved. Sure ah? How do you measure this besides having a PSV license? 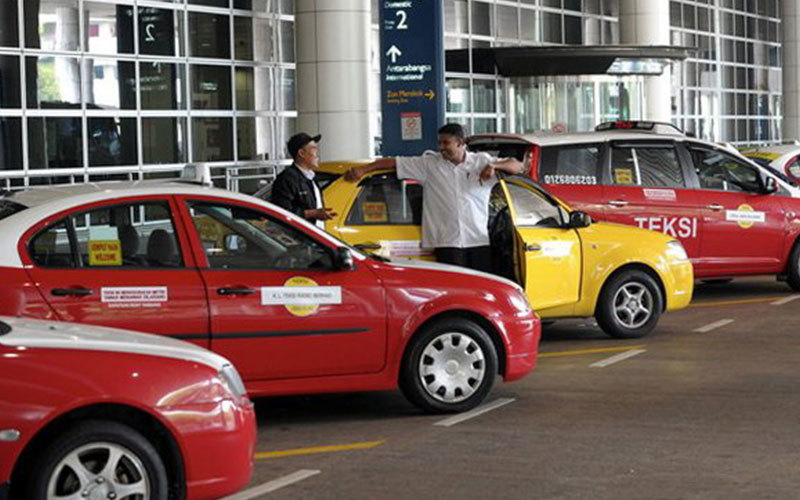 From a holistic point of view, the objective to create a ‘healthy competition’ only creates more questions and greater friction. We understand the part where the gomen wants to legalise the e-hailing industry, to avoid monopoly in the industry and make it safer for the public to use. BUT, we also feel that gomen also fails to look at the matter as a whole and analyse the nightmares that both parties have to endure. Basically, what’s the happy ending to this narrative? 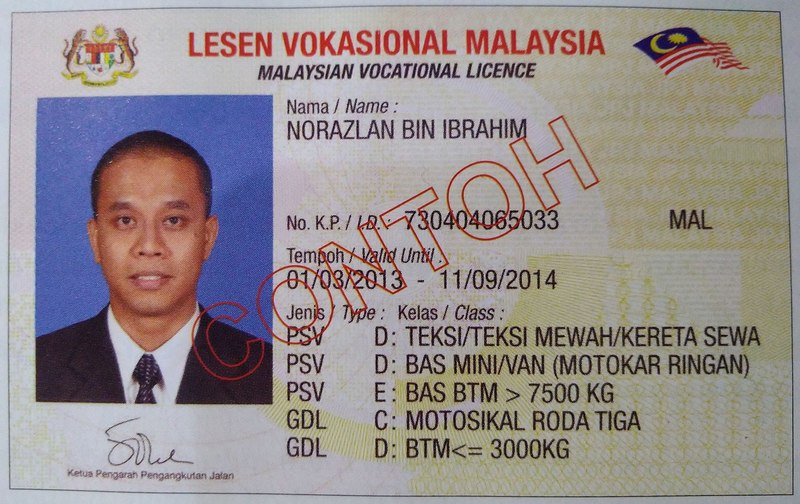 Among other things that can affect a vehicle resale value is the PSV license. Before this, the government will require the words PSV (passenger service vehicle) to be written on the car registration card. Those e-hailing drivers who know how this can affect their car resale value were TRIGGERED. This means that the car will be cheaper than the market price because it’ll be recognised as a commercial vehicle. Rugi lah wei!

Let’s take Proton Saga, for example. We made a comparison between commercial and private car resale prices (refer below images). The commercial car is cheaper by 50%. Take note, that this may not be the most accurate info, but we can see the huge difference in terms of pricing. 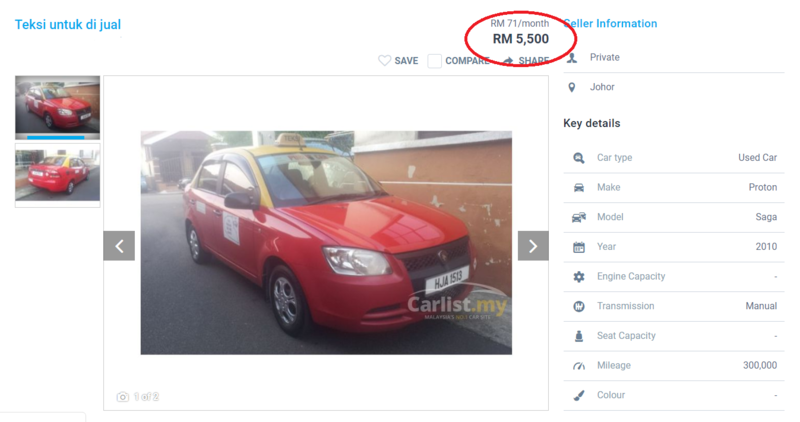 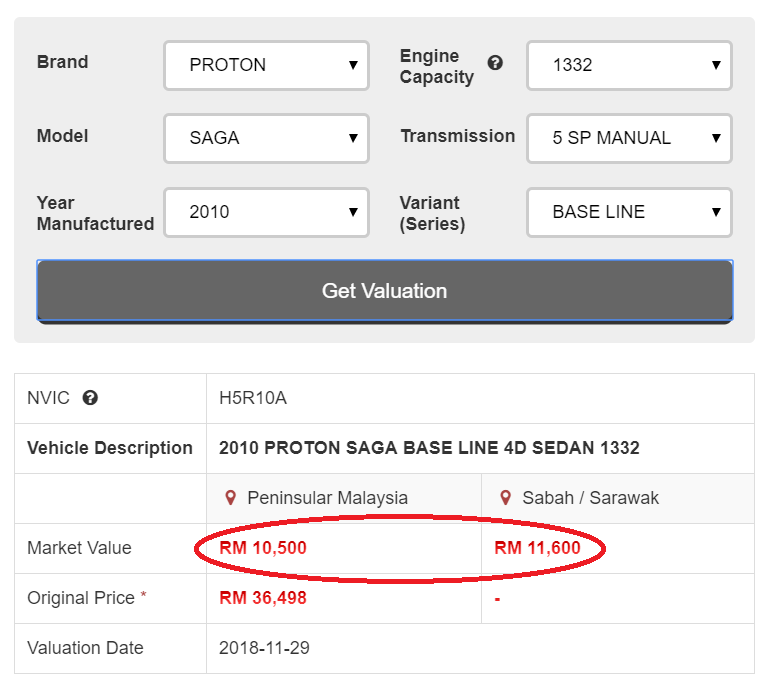 Thankfully, this situation has changed after receiving a lot of complaints from the e-hailing drivers. Our Transport Minister, Anthony Loke, had a discussion with the Road Transport Department (JPJ) and said that e-haling drivers are given the flexibility of not changing their vehicle category from individual private vehicle to e-hailing private vehicle (AH).

3. E-hailing service is no longer an option for side income earners.

As e-hailing has become increasingly popular, it has also become an important source of employment. To add, it has empowered working persons (mostly from the B40 group), students and even housewives to improve their quality of life by earning extra ringgit.

But, things aren’t going to be the same now. E-hailing drivers need a PSV license and EVP permit to operate, even though you only drive 3 hours a year. To obtain them, you need to sacrifice your TIME and MONEY. Now, if this job is your main source of income, you can have a positive mindset and think of it as a capital investment. Of course, you’ll feel the pinch because it means additional cost.

What about those who’re doing this as a part-time gig? Well, the idea of earning side income just doesn’t make sense anymore. 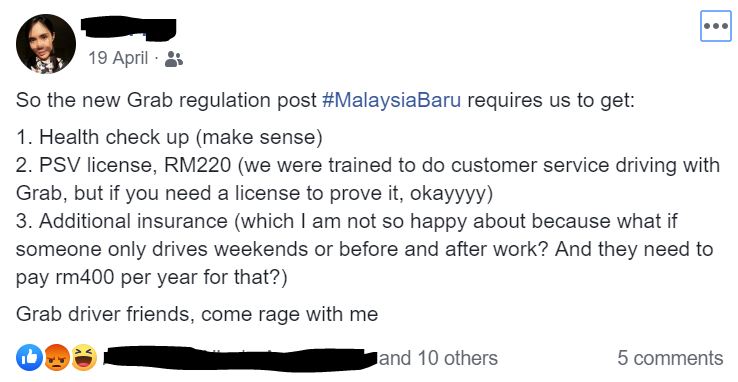 FYI, 75% of the said e-hailing drivers are part-timers and the new regulations will definitely kacau their rice bowl. How so? Well, the cost of living is getting higher (people are trying to survive) and now they have to comply with the new rules and regulations.

So to spend additional money (up to RM1000 - we’ll break down the cost in a bit) just to find extra money is counterproductive. It defeats the PURPOSE. Also, can the e-hailing operators guarantee that they’ll be making as much after getting the license and permit? What’s the ROI?

READ: 6 Well-Paying Side Jobs You Didn't Know Existed in Malaysia

Hence, “carmageddon”. Grab recently made a statement on their social media that they had already experienced a drop of almost 20% in the number of drivers. Meanwhile, Riding Pink (women’s only transport platform, if you’ve never heard) stated that they had received more than a dozen calls and e-mails from drivers requesting to close their accounts because of the complicated and expensive process.

So, how much do you need to FORK OUT to be an e-hailing driver?

1. Get a medical check-up at an approved clinic.

It will cost you around RM20 to RM40, depending on the clinic. You can get it at a reduced cost if the EHO subsidies it.

Also, TAKE NOTE, if you have any of the below, you AREN’T ALLOWED TO APPLY for a PSV license.

2. Go for PSV training to get a PSV license.

To obtain the license, you need to attend a 6-hour training and also pass the written exam. This will cost you about RM20 for the registration; and RM200 for the training and exam. Before that, don’t forget to check with JPJ, if you’re blacklisted due to unpaid saman.

There’s also an option for doing the training online, which is FOC (just make sure you have a stable internet connection). You just need to book your slot for the exam after that. But this is for Grab drivers lah. It’s not clear if other EHOs are also offering the same thing. Perhaps some EHOs doesn't have enough capacity to provide this kind of service to their drivers.

Other than that, you need to renew it every year for RM20.

3. Get your car checked at PUSPAKOM.

This is only applicable to those with cars aged 3 years and above, which will cost you RM70 for the first check-up. After that, you’ll need to pay RM55 for each annual check-up. However, if you fail the initial inspection (because got so many issues), you’d have to re-inspect it with an additional fee of RM25. Not sure which branch is closest to you? Click here.

Don’t forget to bring one of the below to avoid unnecessary stress, okay.
What will they check? Refer below image from PUSPAKOM. 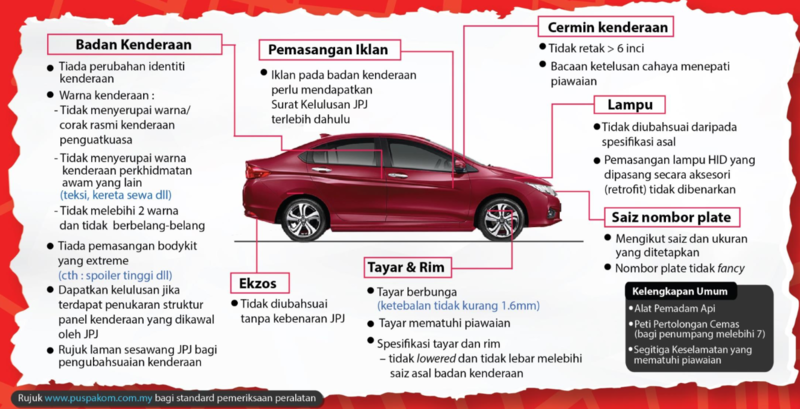 4. Don’t forget about your EVP.

If you don’t have EVP, you can’t simply simply drive passengers around tau. So once your PSV is approved, update your EHO know and they’ll apply it for you from the Land Public Transport Agency (APAD). This agency will do some background checking before releasing the permit. The damage is RM115. For Grab drivers, the cost will be borne by the said EHO.

Do know that you can have more than one EVP. For example, you have an EVP from Grab, now you’re thinking about getting EVP from MyCar for a better prospect, but you’re not sure if that’s allowed. The answer is YOU CAN.

But of course, it means that you have to spend more lah. You think one EVP can be used for all EHOs, is it? Wah, ambition so high… you wait long long lah.

You’ll be required to purchase add-on insurance on top of the current ones. This e-hailing insurance will cost you around RM400 to RM800 per annum - it depends on the vehicle types and insurers.

If you feel that you can’t afford to pay a lump sum for the annual insurance, Grab is offering daily insurance. You’ll just need to spend about RM1 to RM2 a day. But, take note that this insurance only applies to those who drive for Grab, not other EHO. So make your decision wisely.


Will this predicament affect the e-hailing industry?

In the MDEC-Monitor Deloitte Analysis 2017, Malaysia’s sharing economy was recorded to be valued at about RM3.4 billion in 2016 and is expected to reach RM17 billion by 2020. Sharing economy here includes e-hailing, home-sharing, recirculation of second-hand goods and more.

The report also mentioned that said the sharing economy could significantly aid the low-income B40 group or the bottom 40% of Malaysian households that earn an average monthly wage of RM3,860 and below.

There was also data shared recently by Malaysia Indicator stating that e-hailing users will continue to increase until 2021 and grow less actively afterwards. A similar trend applies to revenue growth. 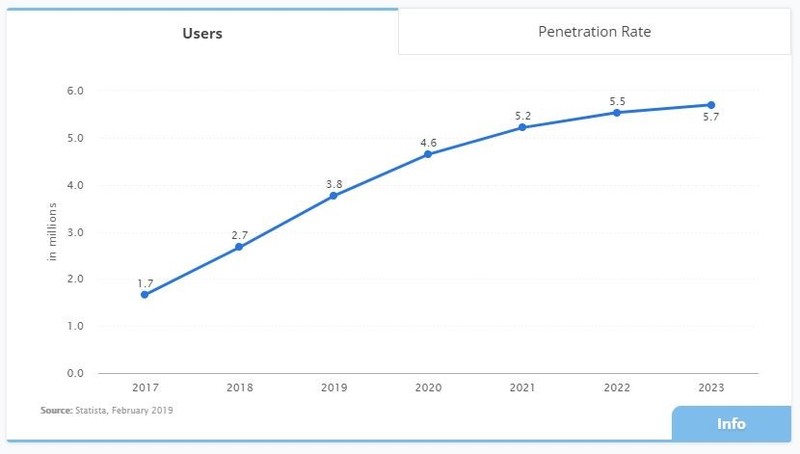 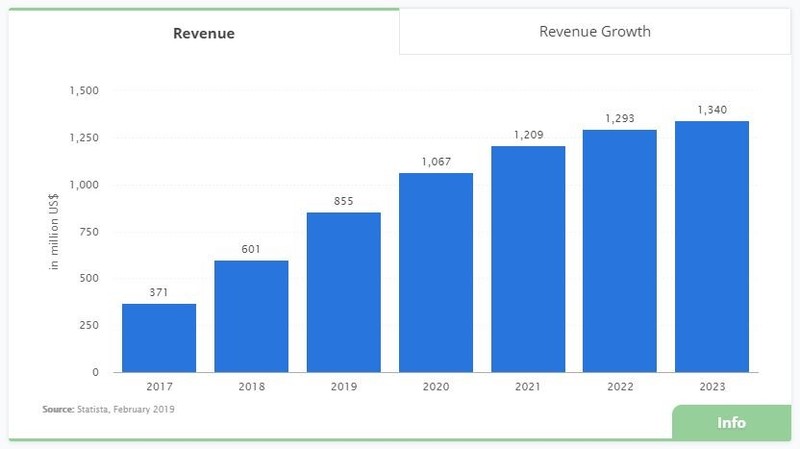 Based on the data above, we can tell that the industry is booming and doing well. It has also helped people to sustain themselves financially. But, we’re not sure if that’s still the case after the new regulations take place.

We’ve heard the news - there’ll be fewer drivers on the road because many are opting to quit due to the additional cost (as we’ve pointed out before). This would make the market less competitive and innovative. To add, it'll also create a supply and demand imbalance. This would then hurt the consumers because it would mean fewer options and price hike to them (it’s already happening and they aren’t smiling from ear to ear).

Let’s take a look at a similar situation that happened in Japan. In 2018, the government announced to regulate the home-sharing industry (Airbnb) to protect Japan’s hotel industry. 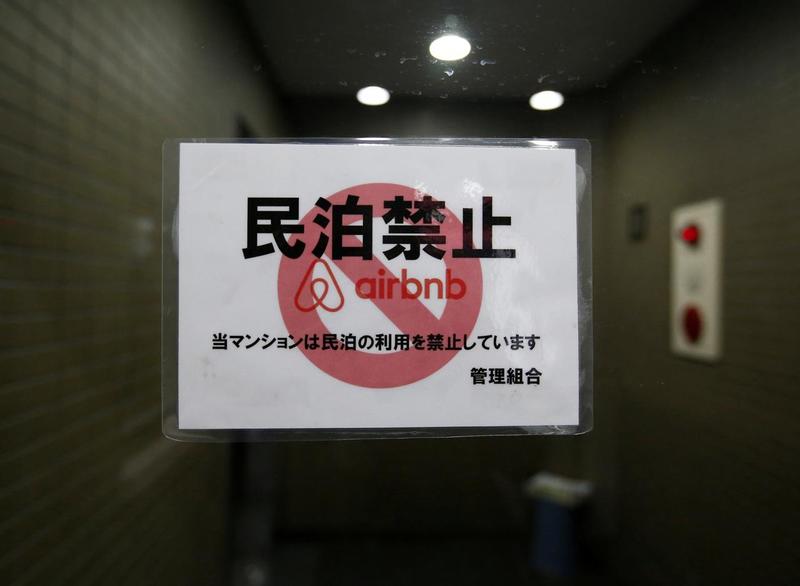 The ‘Minpaku’ (private temporary lodging) law required hosts to go through complicated registration processes and also restrict home-sharing to only 180 days per year. On top of that, they also have to deal with the local regulations such as the restriction of operating only during school holidays or low travel season. This has made it even more difficult for the hosts to gain profit.

To obey the law, Airbnb removed nearly 80% of 62,000 properties available on the website because hosts hadn’t registered with the local government. This also had cost the company US$10 million (RM41,182,000) for compensating the travellers that were affected by the cancellation.

Fast forward to today, the industry is slowly recovering from the crackdown. According to Nikkei Asian Review, Japan Tourism Agency shared that 14,701 private lodgings were registered with local authorities as of March 2019. It’s a huge increase from the 2,210 listed as of June 2018, when the new rules were implemented. 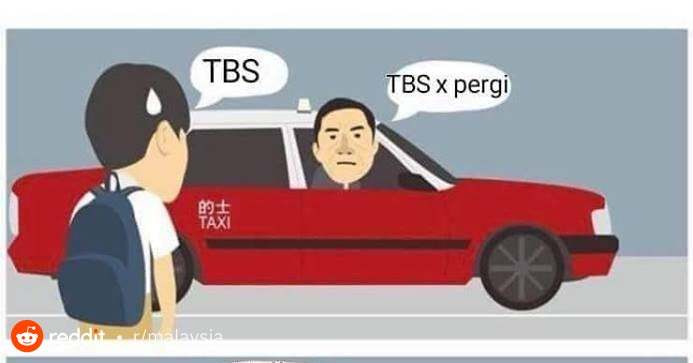 So, will we see the same effect for the e-hailing industry in Malaysia? For now, we can only make assumptions. What’s happening right now stinks for both drivers and consumers - yes, that’s an understatement. We’re not saying that these regulations shouldn’t be imposed. We recognise the importance of it in the long run.

But, why don’t the gomen relook into it and come out with more innovative ground rules for both e-hailing drivers and taxis to make them more competitive? Taking the old regulations and called it new doesn’t make a WIN-WIN situation - both transportation segments have their unique issues. Yes, gomen can’t please everyone, but we do hope that gomen could further examine how the regulations would impact Malaysia’s socio-economic as a whole.