AKPK Expands Its Services in Bid to Help Potential Bankrupts


The Malaysian Department of Insolvency (MdI) recently made an announcement that there were new amendments to the Bankruptcy Act 1967 (now called Insolvency Act 1967, made effective on October 6 2017) in order to help individuals who are facing the potential of being declared bankrupt.

This is where the Debt Management and Counselling Agency’s (AKPK) services have been expanded to become a nominee under the Voluntary Arrangement (VA) service. The VA is a rescue mechanism put into place as a final option for a debtor to negotiate a feasible repayment plan with creditors to avoid being declared bankrupt.

“This pre-bankruptcy rescue mechanism operates as a ‘second chance’ for borrowers to regain control of their finances, without placing any restriction on them the way bankruptcy does.

“With the Insolvency Act 1967 in force, AKPK’s role to promote financial wellness and facilitate debt repayment efforts will now also extend to consumers who are in the advance stages of their legal proceedings. This will allow AKPK to provide a holistic debt repayment option to consumers from all walks of life,” explained AKPK Chief Executive Officer Azaddin Ngah Tasir.

To explain AKPK’s goal as a VA nominee that provides assistance to potential bankrupts, a VA Awareness Briefing was held at Lanai Kijang, Bank Negara Malaysia, on January 29 2018. It was attended by representatives from MdI and included the Heads of Collection and Recovery centres, departments from various financial institutions and credit providers, as well as representatives from government agencies and private sectors.

“Under the new amendment, a nominee will be appointed to act as an independent professional to oversee and to try to structure a debt rearrangement compromise with all the borrower’s creditors. AKPK, under Section 2F of the Insolvency Act, is not required to register as a nominee to the Director-General of Insolvency, signifying their long-term commitment to act as an independent professional in helping the public to better manage their debts,” said MdI Director-General Datuk Abdul Rahman Putra bin Dato’ Haji Taha. 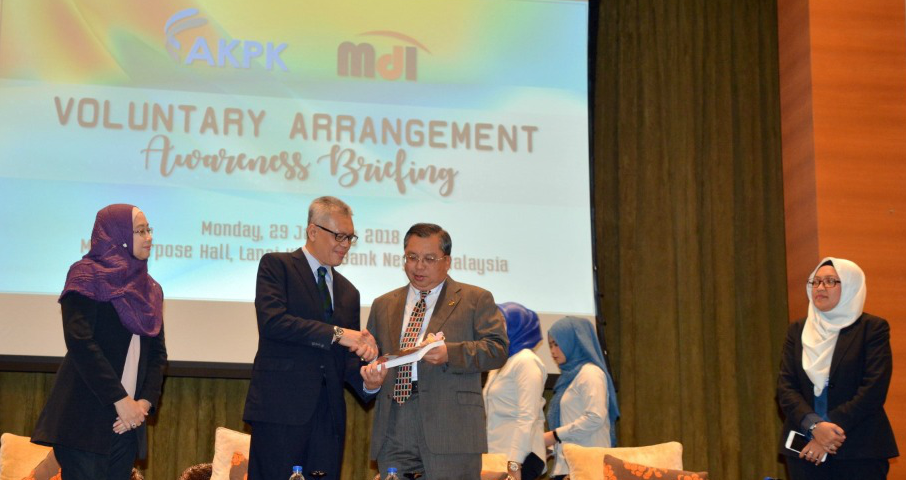 With the arrival of the VA, there are certain key advantages compared to bankruptcy. Among these are:

1)Avoiding the stigma of bankruptcy.
2)Free from the disqualifications and disabilities of a bankrupt provisioned under the Act. The debtor is allowed to travel overseas, be a director of a company, run a business, retain a job, and otherwise lead a normal life.
3)Legally binding agreement, unlike the Debt Management Programme (DMP), between the creditors and debtors that protects the debtors from any legal actions if they comply with the installment plan as agreed.

According to data obtained from the Debt Management and Counselling Agency, the number one culprit of financial woes faced by individuals who seek the help of AKPK is poor financial planning at 43.3%. The second and third reasons are the high cost of living at 21.8% and business slowdown and failure at 14.5%, respectively. Other reasons that caused Malaysians to have debt problems were the loss of job/retrenchment/loss of breadwinner (9.4%), high medical expenses (8.8%) and others (2.2%).

Since the inception of the Agency till present moment, there have been a total of 683,169 cases of people who have sought the professional counselling services of AKPK, out of which 210,814 were converted to their Debt Management Programme (DMP). As at December 31 2017, there were a total of 15,439 cases involving RM617.4mil that were successfully resolved.

“We believe that AKPK’s DMP and financial education services have both played a significant role to curb bankruptcy cases. The VA programme is an excellent opportunity for AKPK to further expand its scope of services to the public, where we are ready to serve in our new capacity as a nominee, and we look forward to get support from all our strategic partners,” enthused AKPK Operations Division General Manager Nor Fazleen Zakaria.